(English) Aldama and the Neoliberal Project of Plunder 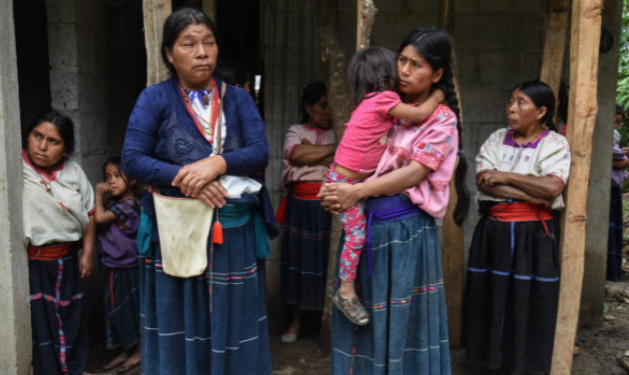 Displaced women and families in the municipality of Aldama, after they had to take refuge from the constant attacks from the community of Santa Martha. Photo: Isaac Guzmán

Just this morning, May 26th, we received messages from compañeros in the highlands of Chiapas that gunfire in the direction of the communities of Aldama has become more fierce over the past 4 days. In the municipality of Aldama, which includes the Zapatista support base community of Magdalena de La Paz, consistent paramilitary fire from the Santa Martha community in the neighboring municipality of Chenalhó threatens the lives and livelihoods of its residents. Under these conditions, milpa cannot be sown, coffee can’t be picked, and children cannot go to school.

Under the nose of government officials and with incentives from political parties and “social programs,” territorial conflicts have escalated across the Mexican countryside; and in Chiapas, several such conflicts (Nuevo San Gregorio, Moisés Gandhi, and Chilón to name a few) have worsened as the June 6th elections approach. The violence follows a predictable cycle of territorial dispossession, with extractive megaprojects on one hand and militarization on the other. Government programs intended to entice party affiliation and shred the rural social fabric prey on indigenous communities in a perpetual internal colonization.

The twists and turns of the relationship between what is now Aldama and Chenalhó date back to 1921, when the original municipalities of Santa María Magdalena (Aldama) and Santa Martha (Chenalhó) were subordinated under the municipal seat of San Pedro Chenalhó. Over the course of several decades, the families of these indigenous communities struggled together against displacement and submission by wealthy mestizos, sharing territories and celebrations. However, in 1975, a misallocation under the Secretary of Agrarian Reform catalyzed the current day dispute over 59 hectares between the two communities. In 1999, in an attempt to constrain Zapatista support bases in Santa María Magdalena, the Secretary of Agrarian Reform tried to force the two communities under a new municipality of Aldama. But residents of Santa Martha rejected the proposal and strengthened their affiliation with Chenalhó, whose leaders, with ties to the perpetrators of the perpetrators of the 1997 Acteal massacre, have actively fostered paramilitary rule.

Since February 2018, more than 2,000 residents of Aldama have been forcibly displaced from their homes. Among the casualties, a trustee of the municipality and member of the National Indigenous Congress was tortured and murdered, and a nun from a humanitarian brigade was shot in the leg., This past May 8th, Pedro Lunes Pérez of Chocó (Aldama) was killed in his home by paramilitary gunfire, as the National Guard patrolled nearby.

Attempts to resolve the conflict have failed to dissipate the rancor. On the part of officials, they appear to be half-hearted at best, for no effort has been made to disarm the perpetrators of the violence. From carelessness to negligence to all-out corruption, the three levels of government have served only to fan the flames of conflict between communities. Under López Obrador’s administration, militarization continues to intensify throughout southeast Mexico, particularly in zones of Zapatista support, to reinforce the economic advantage and firepower on the side of the paramilitaries.

We might ask why all levels of government have failed so miserably to intervene in a meaningful solution. In fact, the same question might be asked of other global conflicts in the news this past week. And the answer is this: destabilizing the autonomy of the people, catalyzing conflict through inequity, and perpetuating rifts via dis-information are all cornerstones not only of the 4T, but of the hegemonic neoliberal project globally — a project bent on territorial dispossession and plunder.