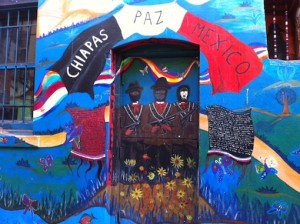 Today, if you were to visit Jack Kerouac Alley in downtown San Francisco, you’d find a colorful mural painted on the side of the City Lights Bookstore. The mural does not depict the day Bob Dylan strolled the alley with Allen Ginsberg and Lawrence Ferlinghetti, or any of the other literary rebels and artists that are so deeply connected with the bookstore and the space. The mural recreates a piece of community artwork that was destroyed in April 1998 when armed forces violently attacked the indigenous village of Taniperla, a Zapatista community in Chiapas, Mexico. As movement art, the mural is an act of public memory, an act of resistance, a connection with the past and a commitment to a shared vision of the future. With simple colors and its own humble voice, the recreated mural has been speaking out to us and communities of struggle everywhere for years: no estan solos—estamos contigo.  You are not alone—we are with you.

But what does that mean? How can anything we do have any impact, really? It’s an important question, one that artists, activists, revolutionaries, and seekers have been asking for ages. When he was doing time in a Birmingham jail, Martin Luther King reflected deeply on similar questions—matters of oppression, struggle, solidarity and pathways to collective emancipation. From his jail cell he wrote: “Injustice anywhere is a threat to justice everywhere. We are caught in an inescapable network of mutuality, tied in a single garment of destiny. Whatever affects one directly, affects all indirectly.” Accepting that view is motivation to act as if every gesture of resistance to oppression were, at some level, transformational, and as if every word we utter to break the silence of complicity with injustice has the capacity to be poetry—poetry as insurgent art.

Today the mural in Jack Kerouac Alley speaks out and calls on us anew. It speaks now not only of Taniperla, but of La Realidad, another indigenous village where the Zapastista movement runs strong and deep, and where violence and aggression are lashing out against it. Today the mural speaks of new brutality against the families, women, men and children of La Realidad, people who have committed their lives to secure and advance their dignity, freedom, democracy. The mural speaks of a recent paramilitary-style attack that has left many in La Realidad injured and one man brutally murdered, bullet holes in his leg, chest and head. The mural names the fallen man: Galeano—father, teacher, compañero. The mural speaks of tears shed, tears of pain, rage and rebellion against generations of abuse and injustice.

Over the past few days, community leadership from the Zapatista communities have been reaching out in an effort to mobilize international help to end the violence and repression now being waged against them. They call not for more violence, but for freedom from violence. “Our efforts are for peace,” says Subcomandante Marcos, “their efforts are for war.”

Movement communiqués and updates about the situation can be read on the Enlace Zapatista site here: http://enlacezapatista.ezln.org.mx. English language translations and suggestions on how you can get involved can be found here: http://www.elkilombo.org

Strong movements are made stronger by our acts of solidarity. In the days ahead, I hope you can join us stand in solidarity with the indigenous families and communities of La Realidad and the broader Zapatista autonomous region.