END_OF_DOCUMENT_TOKEN_TO_BE_REPLACED

The Flower is to Blame

“The flower is to blame” 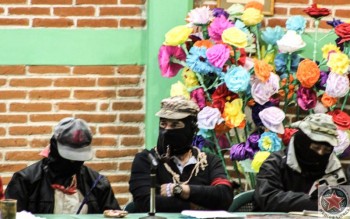 “Earlier this year, on February 30, 2016, the Swedish electronic science magazine, River’s Scientist Research Institute, published a study that may revolutionize science and its social applications.

A group of scientists, led by Swedish doctors Stod Sverderg, Kurt Wallander, and Stellan Skarsgard, presented a complex, multidisciplinary analysis that arrived at the following provocative conclusion: There exists a direct correlation between the increase in quantity and quality of feminist movements, and the decrease in birth rates.

Combining statistical methods, embryology, molecular biology, genetics, and analytical behavior, the scientists concluded that the rise in the diversity of feminism’s belligerence provokes libido inhibitors in males, thus reduces the rate of frequency of sexual reproduction.

But there’s more. Laboratory analyses established that male spermatozoa exposed to feminist activism are weaker than unexposed spermatozoa. Known as astebizisoermia, or “lazy spermatozoa” syndrome, it is more prevalent in male populations where feminism occupies a protagonist role in social organization. According to the published article, Dr. Everet Bacstrom of the Rainn Wilson Institute, headquartered in London, tested the investigation’s theory with a sample of European, WASP, middle class males and reached the same conclusion.

In an interview with the publication, European feminist activists Chloë Sevigny and Sarah Linden said that the study was merely a dirty example of “patriarchal scientism.”

END_OF_DOCUMENT_TOKEN_TO_BE_REPLACED 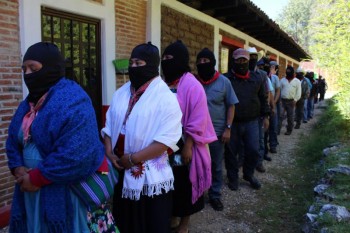 END_OF_DOCUMENT_TOKEN_TO_BE_REPLACED

A Few First Questions for the Sciences and their ConSciences

A Few First Questions for the Sciences and their ConSciences

Scientists [Científicas and Científicos]:
Compas of the Sixth:
Observers and Listeners who are present here and those who are at a distance:

Good morning, afternoon, night, and, as always, the dark hours before dawn:

My name is SupGaleano. As I am only a little over two and a half years old, my version of what used to be called a “curriculum vitae” and now is called a “user profile” is quite brief. In addition to being an insurgente and a Zapatista, I have various other professions. One of them, for example, is to make those who consider themselves fine upstanding citizens uncomfortable, and to awake the basest instincts of those who do not. I do this by showing my clearly seductive and voluptuous figure, which I have achieved, through much effort, via a rigorous diet of greasy meals along with supplementary junk food at my discretion.

I am also, much to my own dismay and that of many readers, the unwilling scribe for the whims of a particular being—mythological for people over 12 years of age and of obvious existential importance for any person passionate about science and any child [niño, niña, or niñoa] who doesn’t care about calendars except to play with. I am referring, of course, to that being whose mere existence lays social and biological Darwinism to rest and marks the emergence of a new epistemic paradigm: the cat-dog. Perhaps, when this entity abandons the prison of the word, world history will be marked and its calendar redefined with “a before and after the cat-dog.”

(The Sup takes out two figurines of the Cat-Dog, carved out of wood and painted by insurgentes).

Another of my professions, at times and on the orders of my bosses, is to feed the paranoid conspiracy theories against the always “suffering,” “selfless,” and well-behaved institutional left that, for lack of real arguments and proposals, resorts to the role of eternal victim in the hopes that pity will translate into votes and for whom fanaticism substitutes for reason and even a minimum of decency.

END_OF_DOCUMENT_TOKEN_TO_BE_REPLACED

Words of the General Command of the EZLN in the name of the Zapatista women, men, children and elders at the opening of the Gathering “The Zapatistas and ConSciences for Humanity”

Words of the General Command of the EZLN in the name of the Zapatista women, men, children and elders at the opening of the Gathering “The Zapatistas and ConSciences for Humanity”

Listen to the audio: (Descarga aquí)

Compañeras, compañeros of Mexico and of the world:

Brothers and sisters of Mexico and of the world:

First and foremost, in the name of the compañeras and compañeros who are Bases of Support of the Zapatista Army for National Liberation, we thank all of the compañer@s of CIDECI who once again have provided us with these spaces so that we, Zapatista originary peoples and scientists, can gather here as a way to begin to look and walk toward what must be done in this world we live in, which capitalism is destroying.

We also thank the compañeros who have worked on registration and coordination for this event.

We also thank the compañer@s from the transport support team.

We thank you in advance, compañeras and compañeros of the various teams and collectives for the shitload of work that you have done to make this gathering happen. Many thanks.

For we as Zapatista men and women, today begins our long walk in search of others with whom we think share the great responsibility to defend and save the world we live in – with the art of artists, the science of scientists, and the originary peoples alongside those below from across the entire world.

A handful of some so-called “neoliberal capitalists” have decided to savagely destroy everything, caring nothing at all for this house that we live in.

This makes us Zapatistas think and ask ourselves:

Where are we poor people of the world going to live, because they, the rich, might just go and live on another planet?

What should we do now, as we see that they are destroying our house?

Or what happens if they take us to another planet to be their slaves?

After turning this over many times in our heads, we conclude that:

Below there are women and men who study science, who study scientifically, who do good science. But the wicked capitalists come along and use this science to do harm to the very people who discovered that science. What kind of harm?

They use science to make the rich richer.

The rich use it as they choose, for a destiny other than that for which it was created. They use it to kill and destroy.

Now it is getting worse for them up there, and that will be used even more harshly against us living beings and our mother earth.

That is how all of these bad things began and how they continue, bringing us to a very dire point today.

This is how things happened, and in the same way they use the artists who make art – capitalism uses everything to the detriment of society and for the good of capitalism. What was natural, nature and those who live within it, which is to say the originary peoples, will be destroyed along with mother nature.

Therefore, we believe, think, and imagine.

We can organize ourselves, work, struggle, and defend who we are – the foundation of this world – so that this world, the house in which we live, can’t be disappeared by the capitalists. Now is the time, brothers and sisters, compañer@s, compañeroas; no one is going to bring us salvation. It is up to us.

Begin to dream and you will see that we can only fight capitalism with good scientific science, the art of the artist, and the guardians of mother nature together with those below from across the world. This is our responsibility.

I don’t mean to say that we are the only ones who should struggle, not at all. But when we look around at how things are, we realize that all of the useful things that we have in our houses are a matter of science, in terms of where they came from, and all of the figures and figurines in our houses and rooms are the art of artists, and all of the materials for these things come from mother nature, where the originary peoples live.

Let’s put it even more clearly.

Who figured out how to make today’s most modern cellphone? It’s the same for thousands of other products – they are used to benefit the rich, and not for the use science intended, nor for the people.

Who figured out how to make the images that are held within cellphones which are now manipulated on any whim?

Where did the materials that cellphones are made of come from? The same question goes for thousands of other goods.

Capitalism has converted science into something used for harm: something to feed its massive accumulation of wealth; something to manipulate at its every whim. It takes no responsibility for the destruction it has wrought with these actions.

We know what will happen.

One more point of clarity.

We are the lifeblood of the rich; we are the flesh and bone that make their lives possible, and the rest of the organs (in this body) are made up of the consumers; meanwhile, they live to do us harm in this capitalist system.

The origin of the evil the capitalist system wreaks on us is revealed.

Our survival, and the other construction of a new world, is in our hands.

Today we are here not to tell each other what to do, but to understand what our function is to capitalism in this world, and to see if what capitalism has us doing is any good for this world that we live in, human and living beings.

And if we discover that it is entirely bad, that the use capitalism makes of our sciences is harmful, then we have to take responsibility and decide what to do.

Before I finish compañeras and compañeros, sisters and brothers, today December 26, we do not forget that there are lives missing from our midst, the life of the 46 missing young people from Ayotzinapa, Guerrero.

Together with their families and friends who continue to search for them and who do not give up or sell out, we Zapatista men and women also demand truth and justice. To these mothers, fathers, sisters and brothers of the missing, we give our largest collective embrace.

So, welcome to this gathering, to this long walk of the other sciences during which there is no rest, because rest would mean that the other, new world is already built, and until it is built there will be no rest.

May your wisdom, scientists, encounter and embrace our desire to learn and to know about the worlds.