Closing Words of the Seminar on Critical Reflection “The Walls of Capital, The Cracks of the Left” 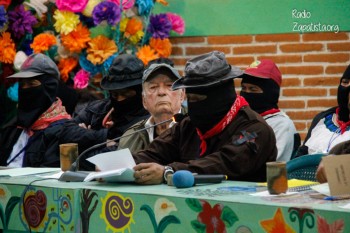 Thank you, compañeras and compañeros of Mexico and the world.

Thank you, sisters and brothers of Mexico and the world.

I thank you because you made a great effort to listen to us during these days that we have been here together, you worked hard to get here and to return home, and we know that requires significant effort.
We who presented spoke a great deal, and it falls to you to sift through our words to see which will be useful to you in organizing, working, and struggling in the places where you live.

We do want to insist to you that capitalism is going to turn the world into its plantations.

That means we poor women and men of the world have to organize, struggle, and work.

We have already seen, understood, and explained countless times what capitalism does to us in the communities where we live, in the country we live in, or on the continent we’re from.

Today we discovered capitalism’s hidden plans for us, we even discovered the name for it—they already know what they’re going to call it, they say “The world is my plantation and on it I shall have my indentured slaves.”i

This means that we poor people ought to be thinking about organizing ourselves, working and struggling as the guardians of the world that we are, and saying “NO” to capitalism.

Let us think about how to organize ourselves, how to struggle and work in the world that capitalism wants to turn into its plantation. It’s clear now that we must struggle not just for one country, but rather for the world. That’s what we’ve been hearing here, that’s what we’ve been saying here, that that’s what’s happening in Mexico and what’s happening in the other countries in the Americas, and we’re sure that it’s happening on the other continents because it’s the same capitalism that’s fucking things up there too. One doesn’t have to be too much of an expert to know whether capitalism is exploiting people on the other continents, but we think we should be experts on how to destroy capitalism so that these evils never come back again.

All of us should study, but we shouldn’t stop at study; rather we should practice what we have understood through study, studying history to improve our practice, to advance.

And study is not just in books, which are good; study is also thinking about what life is like and what it would be like to do something good, or about how bad life used to be and why and how it should be instead.

We all use the word “revolution” or “change”: that change or revolution should be for all the women and men of the world; it’s not revolution or change if it’s for only a few men and women. It’s like justice, democracy and freedom are for everyone, just like with everything.

Today,the compañeros and compañeras of the National Indigenous Congress are calling on us to organize ourselves to struggle from the countryside and the city against capitalism.

The CNI is not calling on us to seek votes; they are seeking and calling on the millions of poor people in the countryside and the city to organize ourselves and destroy capitalism in the world.

So don’t worry, compañeras and compañeros, whether you vote or not is not the problem; the problem is called capitalism, it’s the exploitation they subject us to, and which we suffer.

What we want, and what the compañeros from the National Indigenous Congress want, is for all of Mexico, countryside and city, to be organized against capitalism.

There’s no other way, no other remedy for the suffering caused by capitalism. Organizing ourselves: that’s what the journey of the candidate and the Indigenous Governing Council is about; it’s like a commission that’s going to do a national tour to call on us to GET ORGANIZED.

They will listen directly to the women and men of the countryside and the city; that is, the Indigenous Governing Council and the candidate are our eyes and ears so they can tell us, in the living voice of the peoples, how the bad capitalist system-cum-government has not been able to resolve the peoples’ needs, and the peoples know how those needs should be resolved. But there is no organized people that faces that issue, because in this system we are not taken into account. That’s why we have to organize ourselves, without asking anybody for permission.

Just as they didn’t ask permission to exploit us, there’s no reason for us to ask permission for how we’re going to organize ourselves against that exploitation.

We are going to direct our own affairs, let’s not let anyone else rule us; we’ll listen to proposals but not let them be imposed on us, not anymore, we’ve already lived through that. The people rule and the government obeys, as we Zapatistas say.

This is another opportunity to listen to each other, for the people of Mexico from the countryside and the city to put our dignified rage, wisdom, and intelligence together in order to mark the path of our destiny, instead of capitalism marking the path we should walk and where our destiny will go—those evils we have talked so much about.

That’s what the National Indigenous Congress’s effort is about, and that is why the candidata and the Indigenous Governing Council will make a tour. It’s not to win votes; we already know that there will be few votes and that they’ll still defraud us out of those few votes, and that the bad system will revive the dead to vote in its favor. Enough of that already!

We are seeking the path of our destiny. That’s the task of the compañeras and compañeros of the Indigenous Governing Council and of the independent candidate-spokeswoman: to weave the organization of the originary peoples, to weave the decision of those peoples. The non-indigenous, too.

The National Indigenous Congress, the Indigenous Governing Council and the spokeswoman should always direct their gaze below; their ear should always be attentive to the sounds of below; not looking and not listening up above anymore—life will not come from there, only death.

Let us construct the world where there will be life. But for that, it is necessary to be organized. We need to organize ourselves, we’re not going to get tired of saying it because that’s all we have left—organizing ourselves is all we have left, with intelligence and wisdom, from the countryside and the city.

Compañeras and compañeros, sisters and brothers from Mexico and the world, this means organizing ourselves around the new justice we want, for the true democracy we want, for how we want to live and create our freedom.

It implies the organization of how we’re going to take each other into account in making new laws born of the peoples.

It means organzing how we’re going to achieve our thirteen demands: land, work, food, housing, health, education, true information, equality between women and men, freedom, justice, democracy, and peace.
There’s a lot to say about why we have to get organized, but those who know the most are the poor women and men of the countryside and the city.

We’re saying that we have to get organized.

This is why just organizing votes won’t solve the problem; so whether or not you vote is not the problem.

Get organized, struggle and work, with resistance and rebellion.

Organize yourselves, originary peoples of the world.

Organize yourselves, poor people of the cities.

Let’s organize ourselves, poor people of the world.

Don’t forget that, compañeras and compañeros of the National Indigenous Congress.

Don’t forget that, compañeras and compañeros of the Indigenous Governing Council.

Don’t forget, compañera spokeswoman—independent candidate, to call upon the peoples to organize themselves in the countryside and the city.