Trespass in the office of SIPAZ at San Cristobal. Intimidatory note left. 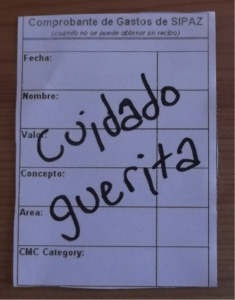 A TRESPASS IN THE OFFICE OF SIPAZ,
LEAVING INTIMIDATORY NOTE

Between Friday, August 14 and the midnight of August 17, 2015, the office of the International Service for Peace (SIPAZ), located in Avenida Chilón #8 in San Cristóbal de Las Casas, Chiapas, was trespassed. A working desk had evidence of disorder, where a team member had left money from an outing that had not yet been recorded. Of that money, 4,196 pesos are missing and 210 pesos were left on the desk in different places. Subsequently, a note was found among the papers that reads “be careful white girl” (see photo). The doors were not forced, nor were the windows, and there is no lack of material value, including computers.

SIPAZ is an organization of international observation and accompaniment. Since 1995, SIPAZ has developed as a permanent program in Chiapas that serves the role of dissuasion and prevention of socio-political violence in Chiapas, Oaxaca, and Guerrero, to contribute from the perspective of nonviolence in the construction of positive peace in these states. SIPAZ consists of a coalition of 47 international organizations, and a board of directors from Europe and America.

Given the seriousness of the events, we express our grave concern regarding our safety and security, as well as the people and defense processes we accompany. It should be recalled that under the provisions of the Declaration on Human Rights Defenders adopted by the UN General Assembly on December 9, 1998, in relation to Article 1: “Everyone has the right, individually and in association with others, to promote and to strive for the protection and realization of human rights and fundamental freedoms at the national and international levels.”