The Art that is Neither Seen nor Heard 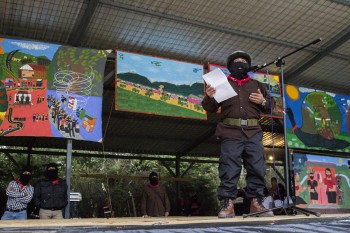 THE ART THAT IS NEITHER SEEN NOR HEARD.

(Note: the following are the comments made by Subcomandante Insurgente Moisés to mark the conclusion of the Zapatista’s contribution to the CompArte, in the Caracol of Oventik, on July 29, 2016. The threat of rain and the pressure of time did not allow for the compañero to fully develop some of his points and there were others that he was unable to touch on at all. Here we present the original version that he was going to give. In his voice, our Zapatista word).

THE ZAPATISTA ARMY FOR NATIONAL LIBERATION

Artists of Mexico and the world:

For us, Zapatistas, art is studied by creating many imaginations, reading the gaze, studying in listening, and practicing.

It is by putting it into practice, that is, by doing it, that you will begin to see the result of the science and the art of imagination – the art of creativity.

There is some science and art that is needed immediately, the kind that helps us imagine how to do it.

For example: To even make something tiny that will contribute to the new world requires that we involve ourselves profoundly in the science and art of imagination, in the gaze, in listening and in creativity, patience, and attention. It requires that we think about how to move forward while building and many other things that must be taken into account.

Because what we want, or what we think about, is a new world, a new system. We don’t want a copy of what we have, we don’t want to improve it a little bit. This is a problem, we say, because there is no book or manual that explains how to create this new world. This book or manual hasn’t been written yet, it is still in the heads of those with imagination, in the eyes that are ready to gaze at the new world that they want to see, in the ears that are attentive in order to hear the new world that they want.

END_OF_DOCUMENT_TOKEN_TO_BE_REPLACED

After Ayotzinapa’s Disappeared, Locals Are Taking Power in Tecoanapa, Guerrero

On Sept. 26, 2014, municipal police attacked a group of students from Ayotzinapa school in Mexico’s Guerrero state. Of the 43 disappeared students, eight came from Tecoanapa. Now their fellow citizens have shut down the local government buildings and set up a people’s council. It’s a movement that is gathering momentum across Guerrero.

We Are Not Zombies

In Defense of the Sierra: Video on Mining in Baja California

Gold extraction seems to be more costly that it appears to be. Dried water mantles, lost agriculture cycles, entire towns abandoned. Know what it’s going on in Baja California Sur, and what is to be done to defend the sierra.

NATIVE VOICES FROM THE NORTHWESTERN MEXICO

This series of documentaries visit to indigenous peoples, peasant and fishermen communities in northwestern Mexico, discovering the everyday life of its characters and the situations they face in order to keep their land and identity..

in VIMEO:  http://vimeo.com/album/2539923
in YouTube: NATIVE VOICES FROM THE NORTHWESTERN MEXICO

ITO’TE SWANE we shall care for ourselves

Message from Alberto Patishtán to the ministers of the Supreme Court

This October 3, the ministers from the Mexican Supreme Court will discuss whether they will assume competence to revise the imprisonment and 60-year sentence against Alberto Patisthán.