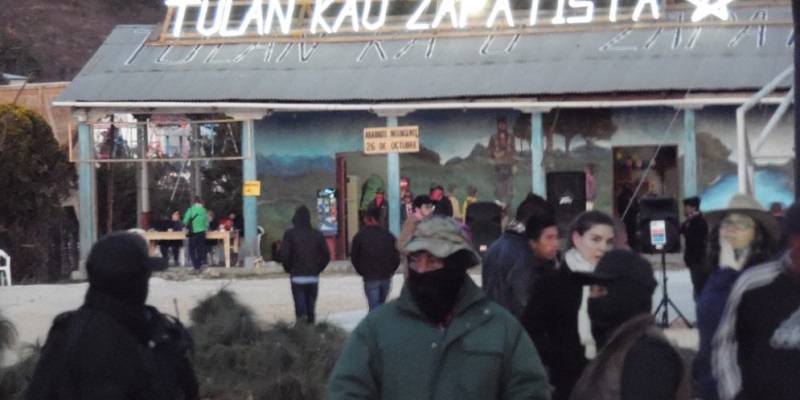 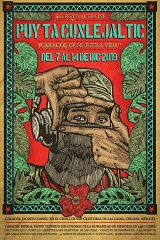 All programming subject to last-minute changes.

Invitation to a Gathering in Defense of Territory and Mother Earth

To the peoples of Mexico and of the world:
To the national and international Sixth:
To the CIG support networks:
To the press:

Capitalism is a world economic system which has, since its birth, operated against human life and our mother earth. Its logic of accumulation and profit can only be reproduced through the ever-increasing exploitation of human labor and permanent dispossession of the land and territory of all of the peoples of the world, especially originary peoples.

In its current neoliberal phase, capitalism takes on ever more monstrous forms, declaring open war against humanity and the earth, our mother. Its current economic model is based on the global reach and dominance of financial capital over peoples, nations, and entire continents. Sustained by massive military and extractivist industries, this system’s insatiable logic of capitalist accumulation and consumption is fueled through real or fictitious wars, the proliferation of organized crime, as well as foreign invasions and coup d’états, putting the very conditions for human existence on the planet at risk.

Furthermore, the current system has intensified the patriarchal organization it inherited from previous systems and civilizations, becoming a violent enemy not only of humanity in general but of women and our mother earth in particular. That is, the exploitation of and deep structural violence against women are characteristic of capitalism, although they were born before it. Private property, the basis of the capitalist system, can’t be understood or explained except as part of a patriarchal system of domination over women and the earth.

END_OF_DOCUMENT_TOKEN_TO_BE_REPLACED 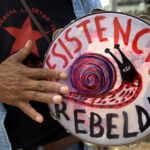 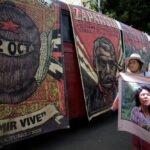 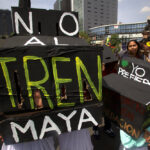 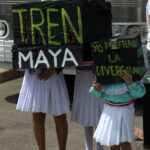 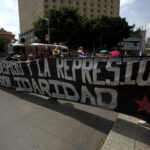 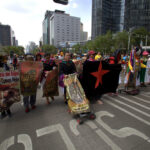 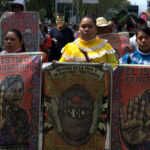 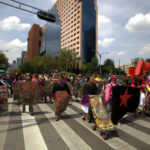 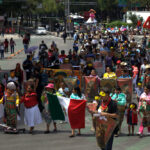 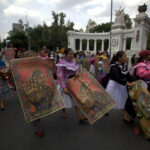 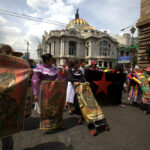 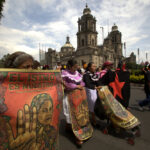 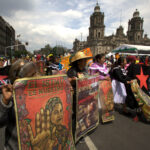 Note from SupGaleano: Here there should be a photo slide show from the new CRAREZ [Centers of Autonomous Zapatista Resistance and Rebellion] which were announced as part of the breaking of the siege on August 17, 2019. This video will likely be removed by Mr. YouTube since it is set to a song by Ana Tijoux (Chilean-French) and Shadia Mansour (Palestinian) entitled “Somos Sur,” [We are the South] and supposedly we either have to pay royalties or accept advertising. We are not of course going to accept advertising, and if there’s no money for water tanks for the new caracol Tulan Kaw, then there’s certainly no money to pay royalties. In any case, the Sixth Commission does not “monetize” our videos (plus, the traffic on our channel is like the traffic during semana santa (Easter) in Mexico City), so I doubt Mr. YouTube is going to end up any less rich because of our refusal to accept advertisement, nor are Ana Tijoux and Shadia Mansour going to lose artistic quality or followers because we have accompanied their rebellion with ours.

Maybe instead of taking down the videos that people set to music—as Zapata didn’t say, “music belongs to those who sing/dance/hum/bounce/whisper/shout and spread it (and like Shadia Mansour says, rapping in Arabic: “music is the mother tongue of the world”)—Mr. YouTube should work on his damned algorithm (“Oh, the twisted lines of YouTube”i). You know how it goes, you start out looking for videos of the guys from Botellita de Jerez to pay homage to the memory of Armando Vega Gil, or you search for ska from Los de Abajo, or Salón Victoria, or some tracks from Jijos del Mais, or Van T, or Mexican Sound, or LenguaAlerta, or Lirica, or Ely Guerra, or Keny Arkana, or the Batallones Femeninos, or from those masters Oscar Chávez and Guillermo Velázquez and Los Leones de la Sierra de Xichú, and all of a sudden you’re getting bombarded with videos of rodeos, cockfights, Maluma giving classes on how to respect women, or makeup videos (“now we’re going to learn how to do makeup for a ‘no makeup’ selfie”).

It’s not that we’re being fussy—after all, like Inodoro Pereyra said (or was it Mendieta?), “Broad and Alien is the World”ii—but rather that here, bandwidth is about as broad as Trump’s IQ: paltry, in other words.

Given all of the above, if YouTube removes the video because of its soundtrack (like it already did with Princess Mononoke, apparently because Studio Ghibli decided to side with the system instead of with natureiii), we’ll repost the same photo slideshow here but without music, and you can add the music yourselves. In fact, I’ll include the translation from Arabic to Spanish of Shadia Mansour’s rap (based on the contribution from the user qmqz posted on the official music video) [TN: translated here in English]:

“Give me the mic:

Music is the mother tongue of the world
It supports our existence and protects our roots, tying us to greater Syria, Africa, and Latin America
Here I stand with Anita Tijoux
Here I stand with those who suffer, not with those who sold us out
Here I stand with culture, resistance
From the beginning and forever, hasta la victoria siempre!
I am with those who are against, with those who have cooperated, with those not on our side
Way back I did the math and I decided to invest in Banksy after Ban-Ki went bankrupt (Note from SupGaleano: possibly a reference to Ban-Ki Moon, who was Secretary General of the United Nations when this song was recorded, and went “bankrupt” when he refused to condemn the Israeli government’s terrorist actions against the Palestinian people).
As the saying goes, “it’s not that the situation needs a ‘proportionate response’, the situation needs to be stopped”
For every freed political prisoner an Israeli settlement grows
For every civil greeting a thousand homes are destroyed
They use the press to their benefit
But while my sorrow is vetoed, reality insists”

You know what? With or without YouTube, with or without advertising, the Palestinian people and the Mapuche people will achieve freedom. Ten, one hundred, a thousand times they will reach victory.

And if Mr. YouTube takes the whole thing down as part of the “fuck the Zapatistas now” campaign, oh well, we’ll just go back to the good old days of the Zapatista Intergalactic Television System, “the only television channel that you read” (Permit 69, currently being processed by the Good Government Councils, submitted as of 1996 but caracoles move slooooooooowly….).

ii “El mundo es ancho y ajeno,” a 1941 novel by Ciro Alegría narrating indigenous struggle in the Peruvian highlands against land-hungry interests. Inodoro Pereyra is an Argentinian cartoon created by Roberto Fontanarrosa that parodies folklorism through the story of a lonely Argentinean gaucho and his co-protagonist, a talking dog, Mendieta.

iii Princess Mononoke is a Japanese animated period drama written and directed by Hayao Miyazaki and animated by Studio Ghibli which narrates an epic and fantastical struggle between the supernatural guardians or gods of a forest and the humans who consume its resources.

END_OF_DOCUMENT_TOKEN_TO_BE_REPLACED

Communique from the EZLN’s CCRI-CG: And We Broke the Siege 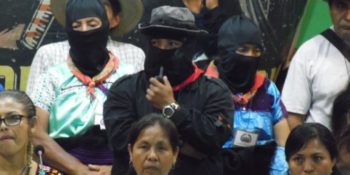 We bring you our word. The same word as yesterday, today, and tomorrow. It is the word of resistance and rebellion.

In October of 2016, almost three years ago, during the 20th anniversary of the National Indigenous Congress [CNI], the sister organizations of the National Indigenous Congress and the EZLN made a commitment to go on the offensive in our defense of our Territory and Mother Earth. Persecuted by the bad government, by caciques, by foreign corporations, by criminals, and by the law, and as we accumulated insults, derision, and dead, we the originary peoples (the guardians of the earth), decided to go on the offensive and circulate the words and actions of resistance and rebellion.

With the founding of the Indigenous Governing Council [CIG] and the selection of its spokesperson, Marichuy, the National Indigenous Congress gave itself the job of taking words of warning and organization to the brothers and sisters of the city and countryside. Meanwhile, the EZLN also went on the offensive in its struggle with its words, ideas, and organization.

The time has come to hold ourselves accountable to the CNI-CIG and its spokesperson so that their peoples can decide if we have lived up to what we promised. But it is not only the CNI-CIG that we are accountable to; we also have a pending debt with the organizations, groups, collectives, and individuals (especially those in the Sixth and the Networks [of Rebellion and Resistance], but not only them) that throughout Mexico and the world concern themselves with our Zapatista peoples. These are people who, whatever their calendars, geographies, and habits may be, disregard the walls, borders, and sieges that are erected to divide us so that their hearts can continue to beat close to our own.