Then he stopped talking and straightened the papers on the table. The lights went out. In the penumbra, illuminated just by the faint light of a video camera, he stood up.

He walked a few steps toward the rear of the stage.

Walking slowly, he crossed the threshold.

He began to go down the wooden stairs.

And he slowly faded into the darkness.

And he ceased to exist.

Then a silence spoke out charged with gratitude and so many other things from thousands of hands clapping in unison, and the faces holding back tears, and the hearts repeating: Farewell, Subcomandante. “One, two, three,” the voice of Comandante Tacho was heard talking on the radio. The lights went on again. And Subcomandante Insurgente Moisés, military leader and now also spokesperson of the Zapatista Army of National Liberation, said: “Compañeros, compañeras, we are going to listen now to the voice of another compañero.”

From the speakers came the voice which until a few minutes ago, for the last twenty years, belonged to Subcomandante Marcos, now coming to life anew, mocking death. “Have a good pre-dawn, compañeras and compañeros. My name is Galeano. Subcomandante Insurgente Galeano. Is anyone else called Galeano?”

“So that’s why they told me that when I was reborn, I would do it collectively. So be it then. Have a good trip. Take care of yourselves, take care of us. From the mountains of the Mexican Southeast. Subcomandante Insurgente Galeano.”

Exactly one hour before, when the then Subcomandante Marcos began to speak, we heard these words:

I would like to ask the compañeras, compañeros, and compañeroas of the Sixth Declaration who come from other places, especially the free media compañeros, for their patience, tolerance, and understanding for what I am going to say, because these will be my last words in public before ceasing to exist. 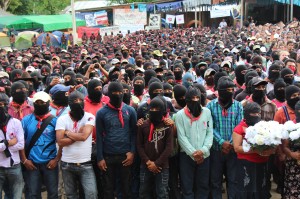 We were almost one thousand women and men, adherents to the Sixth Declaration of the Lacandon Jungle from many parts of Mexico and from other geographies, who after long travesties came to La Realidad to attend the homage organized by the EZLN in honor of compañero José Luís Solís López, maestro Galeano, murdered with inconceivable cruelty on May 2nd in a paramilitary attack carried out by members of the supposedly peasant organization CIOAC-H, members of the Green Party and the PAN in that community, and orchestrated from the core of the Chiapas government. There were also close to three thousand Zapatista support bases who, with impressive organization, traveled from the five zones of the large Zapatista territory. We arrived, all of us, filled with pain and rage and seeking, with the grammar of wrath and the calligraphy of dignity, the precise expression of true justice.

But what form would that justice take? How to conjugate justice without its verbal form (in Spanish: “ajusticiar,” to execute) acquiring the tonalities of revenge? It is clear that the legal systems of our “democracies” have nothing to do with justice, nor are they concerned about it. And it is more than clear that, in Mexico as in many other places, those legal systems are at the service of abuse and plunder. But then, what is justice? 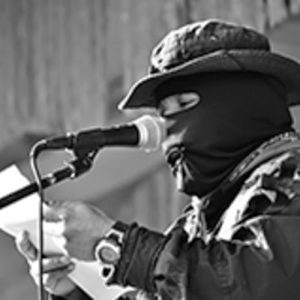 Over the course of that memorable May 24th, Subcomandante Moisés announced that the Zapatista investigation had already identified the material authors of the crime. He also detailed the ties between the leadership of the CIOAC-H and the various levels of state and federal governments. And he also affirmed that justice would be done, but he asked us not to direct our dignified and justifiable rage against those who, in their blindness and avarice, turn into murderers at the service of the powers of capital. We must direct that rage against the system, he said.

At the crossroads of questions, Subcomandante Marcos’s last words before ceasing to exist attempted to illuminate that indecisive space between light and shadow. In 1994, he said, the Zapatistas rose up exercising the right to legitimate violence of those from below in the face of the violence from above. “But in the first stammers that were our words we realized that our dilemma was not between negotiating or fighting, but between dying or living.” Therefore, after the first combats were over, instead of strengthening the guerilla army, the Zapatistas dedicated themselves to life, building education, health, dignity, justice, hope, autonomy, and a government of the people which commands by obeying. And in all this, resisting the violence of above without weapons, with their body, head held high and saying: “we, the same dead as always, are here dying again, but now in order to live.”

Along the way, something fundamental was changing within the EZLN, changes that went unnoticed by many people:

That of class: from the enlightened middle-class origin, to the indigenous peasant.
That of race: from the mestizo leadership to the truly indigenous leadership.
And the most important: the relay of thought: from revolutionary vanguardism to leading by obeying; from the taking of Power from Above to the creation of power from below; from professional politics to everyday politics; from the leaders, to the peoples; from the marginalization of gender, to the direct participation of women; from mocking the other, to the celebration of difference. 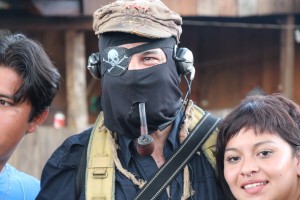 Along this path, who was Marcos? There is something which does not cease to surprise those of us to whom the Zapatistas have taught to see the world in a different way: the fact that, for the great majority of people outside of the Zapatista communities, the EZLN is only Marcos; most people’s inability to see the indigenous.

Just a few days later [after the uprising], with the blood of our fallen still fresh in the city streets, we realized that those from outside did not see us.

Accustomed looking at the indigenous from above, they did not raise their eyes to look at us.

Accustomed to seeing us humiliated, their heart did not understand our dignified rebellion.

Their eyes were fixed on the only mestizo they saw with a balaclava, that is to say, one they did not look at.
Our bosses told us then:

“They only see their own smallness, let’s make someone as small as them, so they may see him and through him they may see us.”

A complex maneuver of distraction began then, a terrible and marvelous magic trick, a malicious play of the indigenous heart that we are, the indigenous knowledge challenging modernity in one of its bastions: the media.

The character called “Marcos” started then to be built. 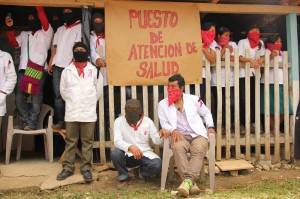 The character served to make known a movement which struggled and struggles for life. But it also served as a “distracter,” in a way that, while those from above and the mass media were busy building and destroying the character, the Zapatistas continued their walk in the construction of life.

In that walk Zapatismo always reached out to the other, on the paths that seek life not only for the indigenous Zapatista communities. And in that search, they failed time and again: “Those we found either wanted to lead us or wanted to be led by us.”

But it remained to be seen whether it was possible for you to look at and listen to what, being, we are. Internally, the advance of our peoples has been impressive. Then came the course, “Freedom according to the Zapatistas.” In 3 rounds, we realized that there now was a generation that could look at us face to face, that could listen to us and speak to us without seeking a guide or a leader, nor professing submission or followership.

Marcos, the character, was no longer necessary. 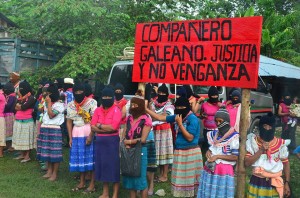 And so we return to the issue of justice. Of pain and rage, of the grammar of wrath and the calligraphy of dignity. Because the General Command and the military leadership of the EZLN came to La Realidad with that pain and that rage, with that cry for justice. But, as Subcomandante Marcos well said, there are other pains and other rages in so many other geographies:

Right now, in other corners of Mexico and the world, a man, a woman, an other, a boy, a girl, an elder, a memory, is beaten in cold blood, surrounded by a system of voracious crime, clubbed, macheted, shot, finished off, dragged among taunts, abandoned, their body then recovered and mourned, their life buried.

And as if that were not enough, “the greatest mockery” of all is the pantomime of “justice” which never threatens nor punishes nor harms the power which buries and tramples life. In the face of this, what do we say to our dead? Is the impotent whisper of pain and rage sufficient? “Our whispers,” said Marcos, “are not only to lament the unjust fall of our dead. They are to allow us to listen to other pains, to make other rages ours, and to continue treading along the complicated, long, and torturous path of making all that become a roar which is transformed into a struggle for liberation.”

Small justice looks so much like revenge. Small justice is that which distributes impunity; as it punishes one, it absolves others. The justice we seek, that for which we struggle, does not end with finding the murderers of compa Galeano and seeing that they receive their punishment (they will, make no mistake about it). The patient and adamant search seeks truth, not the relief of resignation. Great justice has to do with the buried compañero Galeano. Because we ask ourselves not what to do with his death, but what we must do with his life.

From early that day, the General Command of the EZLN said that they had arrived to bring maestro Galeano back from the grave. But in order for Galeano to live, said Marcos, someone else must die.

And what a better choice than someone who never existed in the first place. So to satisfy the impertinence that is death, in the place of Galeano we put another name so that Galeano may live and death may take away not a life, but only a name, some letters devoid of all meaning, without a history of their own, lifeless.

So we have decided that today Marcos ceases to exist.

When the voice of the now Subcomandante Insurgente Galeano ceased to be heard and the clapping died out in that indecisive space between light and shadow, under the drizzle of that pre-dawn morning in Zapatista reality, we were overcome by a silence impregnated by the certainty that something “terrible and marvelous” had just happened. Something which we still did not understand, which perhaps would take days, months, years, our whole life, to understand. Something that would be, for us, for those who had the fortune of witnessing it, a perpetuous source of search and the conviction to never falter. 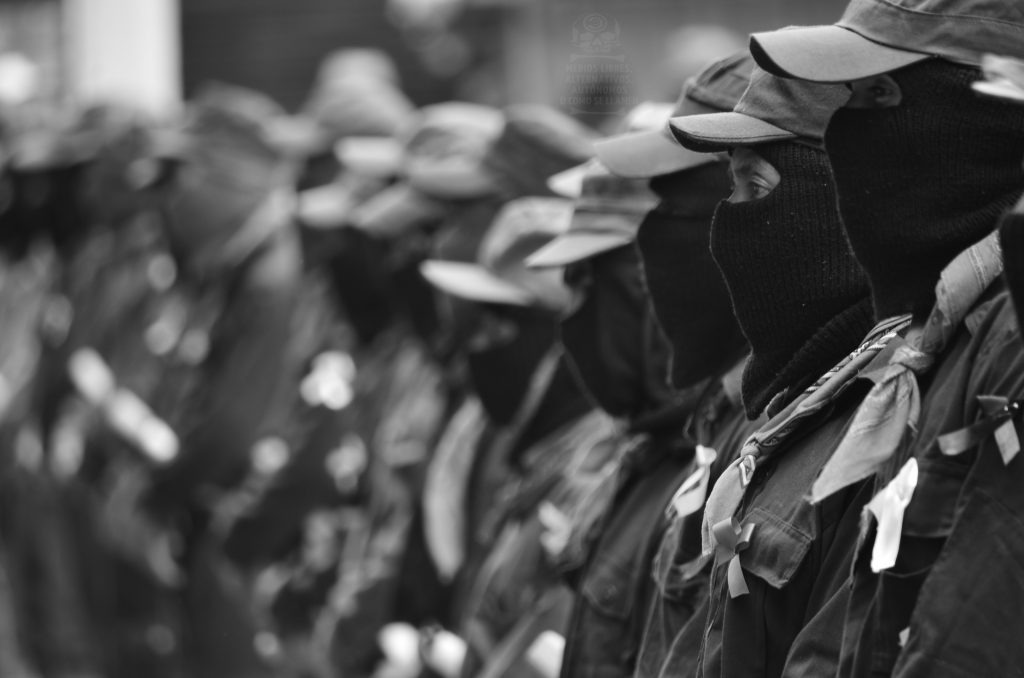 To listen to Subcomandante Marcos’s last words before ceasing to exist, clic here: BETWEEN LIGHT AND SHADOW