Jenaro Villamil, journalist for the magazine Proceso, presented last night his books Si yo fuera Presidente: el “reality show” de Peña Nieto and El Sexenio de Televisa: conjuras del poder mediático. During the presentation at Centro Cultural Tierra Adentro, San Cristóbal de Las Casas, Villamil spoke about Televisa’s political power and its alliances with Enrique Peña Nieto and the government of the state of Mexico, as well as his links with the state of Chiapas.

Jenaro Villamil participated in the negotiations for the reform of the federal law of radio and television in 2001 and 2002, was a promoter of the federal law of transparency and access to public information. He is currently a graduate professor of political journalism at the Carlos Septién García School and is author of several books. 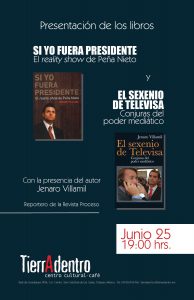