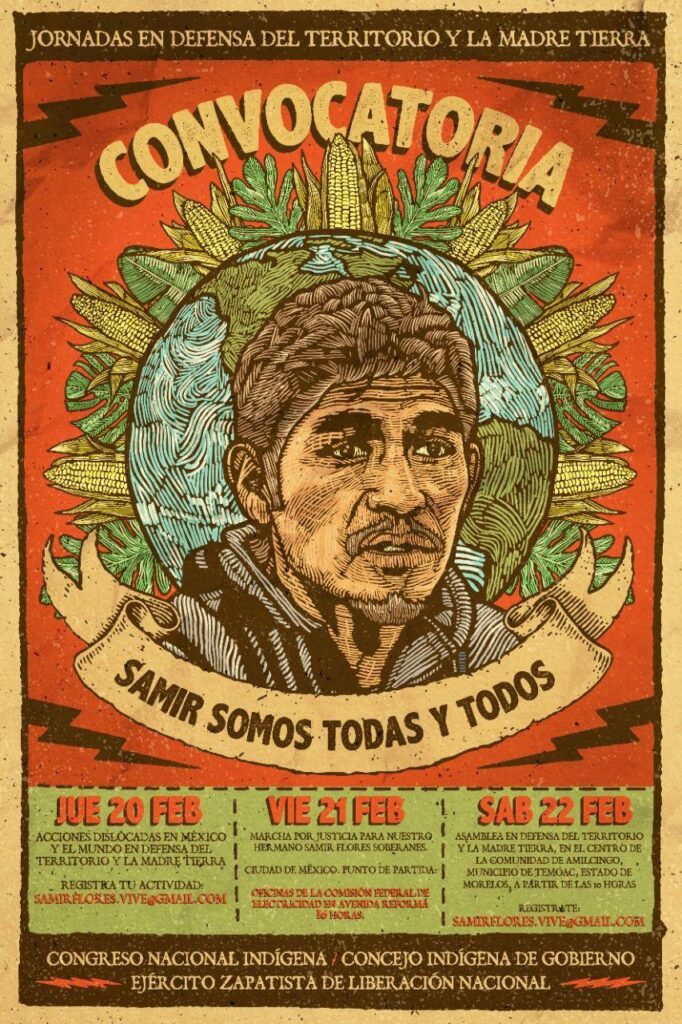 SISTERS AND BROTHERS OF MEXICO AND THE WORLD:

First: Today more than ever, capitalism grows through war and the ongoing dispossession of all forms of life. The bad governments and the big capitalist businesses, all of which can be identified by name, try to disappear our struggles in defense of territory and Mother Earth, even normalizing the murder of our brothers and sisters who defend that territory and our Mother Earth. Today our collective heart hurts for the murders of:

Our compañeros were murdered for opposing the war the bad government is waging on our lands, hills, and waters in order to consolidate the dispossession which today threatens humanity’s existence.

We also feel the pain of the forced disappearance of our brother Sergio Rivera Hernández, Nahua of the Sierra Negra, Puebla, who also defended land and Mother Earth.

Second: The current neoliberal phase of capitalism takes on ever more monstrous forms, declaring open war on humanity and against the earth, our mother. Economic development today, based everywhere on finance capital and supported by the military and extractivist industries, dominates peoples, nations, and entire continents. It grows through real or fictitious wars and the proliferation of organized crime as well as invasions and coups d’état. Its insatiable consumptive and accumulationist capitalist logic has brought us to the brink of irreversible climate change and a limit at which the very conditions for human life on the planet are at risk.

Third: In addition, the current system’s patriarchal organization, inherited from previous systems and civilizations but deepened over the past several centuries, has been exposed as a violent enemy of humanity as a whole but especially of women and our Mother Earth. In other words, the exploitation of and profound structural violence against women is an integral part of capitalism, although it was born long before. Capitalist private property, the foundation of this system, cannot be explained or understood except as part of a patriarchal system of domination over women and the earth.

Fourth: In Mexico, the acceleration of mining, extraction, and hydrocarbon pipelines, the creation of the National Guard within the logic of the Merida Initiative, and the imposition, at all costs, of major megaprojects (The Salina Cruz – Coatzacoalcos Trans-Isthmus Corridor, The Mayan Train, the Morelos Integrated Project, and the New International Airport in Mexico City)—all of which are intended to reorganize territories, populations, and both the northern and Central American borders in a logic of capitalist displacement and exploitation—make a clearly anti-capitalist and anti-patriarchal defense of human life, of the territories of our peoples, and of the earth all the more urgent. For these reasons:

We invite: the peoples of Mexico and the world; organizations and collectives of workers of the countryside, city, and seas; women; students; children; elders; and those across the range of sexual diversity to:

On the following dates:

February 20, 2020: Local actions in Mexico and around the world in Defense of Territory and Mother Earth; in demand of justice for our dead, disappeared, and imprisoned; and against the megaprojects of death.

February 21, 2020: March for Justice for Our Brother Samir Flores Soberanes and for our dead, disappeared, and imprisoned, and in Defense of Territory and Mother Earth. Meet at the offices of the Federal Electricity Commission, Avenida Reforma, Mexico City, 4pm.

February 22, 2020: Assembly in Defense of Territory and Mother Earth, to take place in downtown Amilcingo, municipality of Temoac, Morelos State, starting at 10am.

January 7, 2020.
For the Full Reconstitution of Our Peoples
Never Again a Mexico Without Us