In recent times, the Turkish state has increased the threats of war against the Democratic Federation of Northeastern Syria, Kurdish territory where autonomy has been built in recent years, with a secular government where women’s liberation has played a central role. Beofre the threat, an International Campaign to Defend the Revolution in Rojava and its Achievements has been launched. 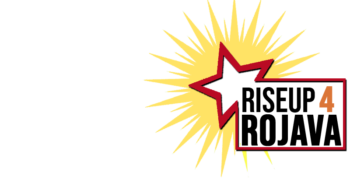 The campaign, which uses the hashtag #riseup4rojava, identifies the companies that suuport Turkish fascism with a wiki and an OpenStreetMap that are continuously updated, as inputs for boicot and protest actions around the world.

At this moment, the call includes two actions:

International Days of Action (6 and 7 September 2019) to distub and block the places of military, diplomatic and economic collaboration with the Turkish state.

Call for Day X: Worldwide mobilization against a Turkish invasion in Northern Syria.

The following is the text of the calls for action:

While the population of Rojava continues their struggle for self-determination, women’s liberation and radical democracy, defending itself against the attacks of jihadist gangs and the fascist Turkish state, the representatives of hypocritical governments shake hands with the Turkish oppressors.

While liquidation plans against the revolution in Kurdistan and Syria are made in Ankara, the European, Russian and USA weapon industries become richer day by day as a direct result of the wars in the Middle East. They make profits which cost millions of lives.

While hundreds of thousands of people have been displaced from Afrin by jihadist gangs supported, equipped and monitored by the Turkish army, these jihadists and their families are settling and exploiting the resources of the people. They are selling the symbol of Afrin itself, olive oil from olive trees that have been cultivated there for hundreds of years, through Turkey to Spain and other European countries. This is what the Turkish state means when it claims to be securing its border: ethnic cleansing and jihadist gangs attacking the local people.

Not only in Afrin, but also in the mountains of Kurdistan and in the Turkish prisons, a huge resistance is being waged against these policies and attacks. In Northern Syria, the SDF, YPJ and YPG recently wiped out the remains of the Islamic State. This historic victory was only made possible through the bravery and sacrifice of thousands of martyrs, and the heroic resistance of local people. Thousands of women have organized and liberated themselves, and countless communes and cooperatives have been founded. The societies of Kurdistan, of Northern and Eastern Syria, have risen and are advancing day by day.

Turkey is proclaiming its success in “containment” of the refugee crisis outside the borders of Europe, but more and more people are realizing the true face of this regime. In reality, until Turkish fascism is defeated, ISIS will continue to be a threat and the revolution of Rojava will be under attack.

We must expose and attack the military and diplomatic cooperation between the AKP-MHP government and opportunist governments of the USA and Western European states. We have to build a collective resistance against the cooperation of our governments with Turkish fascism. The physical fight against Turkish and jihadist aggression in the Middle East must explicitly be connected to the fight against the policies of complicit governments around the world. If more democratic and revolutionary movements mobilise and organise through our communities and class rooms, agitating in our workplaces and the media, we can establish a second front against Turkish fascism and imperialism in Middle-East.

We must expand our actions, connect them and internationalise them. We have to trespass from a politics of protest to permanent political resistance. The Turkish army is firing their weapons, and NATO is providing the ammunition. The people of Kurdistan and Northern Syria are already responding to these attacks. We, as anti-fascists and revolutionary forces, will take action – through occupation, blockade and disruption – against the places of military, diplomatic and economical cooperation for Turkish fascism in our countries.

In solidarity with the people of Rojava, we will show solidarity through the following goals and actions:

1. We defend the Revolution and its achievements. We align ourselves with the revolution in Kurdistan, the defining struggle against the biggest manifestation of fascism of our time, and for the liberation of women and society.
We see this revolutionary process as being in line with the ongoing resistance in the history of humanity, following the October Revolution, the Spanish Civil War and the Cuban Revolution.

2. We will disrupt, block and occupy companies and financial institutions which support Turkish fascism militarily or financially. This includes exposing truths and spreading information, as well as mass actions and civil disobedience.

3. We denounce all associations, governments and alliances supporting the Turkish fascist state. We have to analyze their cooperation and disclose their self interested motives. The enemies of the revolution in Kurdistan and Syria are also our enemies. We oppose the intervention and occupation policies of the NATO-countries and the Russian Federation in the Middle East.

4. We will prevent the lies of the Turkish propaganda from spreading and in this way deny Turkish fascism any breathing room. Through lobbying and propaganda they try to spread their ideology and gain support for their criminal war. We will fight this ideology. Turkish fascism is our common enemy, our unity is internationalist anti-fascism!

We call on all activists and militants to join #riseup4rojava!

The revolution in northeastern Syria will prevail, Turkish fascism will be smashed!
Long live anti-fascist internationalism!
Solidarity with the anti-fascist forces in Turkey, Kurdistan and in the whole Middle-east!