CNI and EZLN: Solidarity and support for our brothers and sisters of the Wixárika people 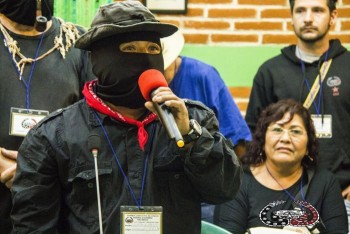 Listen to the words of the CNI and the EZLN, in the voice of Subcomandante Insurgente Moisés, during the Assembly to constitute the Indigenous Governing Council:
(Descarga aquí)

To the Wixárika People
To the Peoples of the World

Gathered together in the Constitutive Assembly of the Indigenous Council for Mexico at CIDECI–UNITIERRA, Chiapas, the indigenous peoples, nations, and tribes who make up the National Indigenous Congress and the Zapatista Army for National Liberation say to the Wixárika people that we stand together, that your pain and rage are also ours, and that the path of your historic struggle is part of the hope we have as a country and as a world.

We repudiate and condemn the cowardly murder of the compañeros Miguel Vázquez Torres and Agustín Vázquez Torres of the Wixárika community of Waut+a- Saint Sebastian Teponahuaxtlán in the state of Jalisco on May 20 of the present year at the hands of the mercenaries of organized crime. This crime could not have happened without the absolute complicity of the bad governments on all levels, given that the riches of the Wixárika lands are coveted by the powers of capital which know no limits and which use their narco-paramilitary groups to try to dismantle an organization as exemplary as that of the Wixaritari.

We know they will not achieve this; they have never been able to and never will because the fabric that keeps the originary peoples alive also sustains the hope we are building together in order that a new world be born of resistance, rebellion, and the determination to keep existing.

We salute the exemplary defense of the territory that the compañero Miguel led, without ever turning back, as well as the paths the Saint Sebastian community is forging to recuperate nearly 10 thousand hectares invaded by ranchers, supposed small landowners from Huajimic, Nayarit. These ranchers are protected by the capitalist governments’ determination to pretend to dialogue while preparing a bloody end to this conflict, disguising it as drug cartel activity, as unclear state or municipal borders, as lying “task forces”i, as complicated judicial proceedings, or as supposed budget limitations.

Wixaritari compañeras and compañeros, we are with you and we know that the steps you collectively decide to take will be wise and dignified. We will not be indifferent nor oblivious to the support and solidarity that we have mutually shared on the CNI’s historic path.

We emphatically demand the solving of this crime against a whole people, punishment of the guilty, and the dismantling of the Jalisco New Generation Cartel and all the criminal capitalist corporations that seek to take over the territories and autonomous organization that we peoples, nations, and tribes defend.

We demand that the the ancestral territories of the Wixárika people be wholly respected, that the territory invaded on the outskirts of Huajimic, Nayarit, be urgently restored [to the people], and that the forms of security and justice decided upon and exercised by the community of Waut+a- Saint Sebastian Teponahuaxtlán be fully respected.