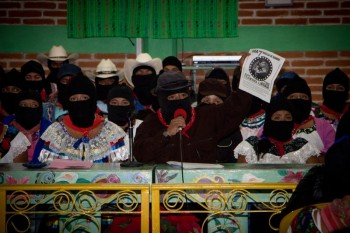 JOINT PRONOUNCEMENT FROM THE CNI AND THE EZLN FOR THE FREEDOM

We peoples, nations, and tribes of the National Indigenous Congress send a fraternal greeting of solidarity to Machi Francisca Lincolao Huircapan, of the Mapuche People, in Chile, imprisoned since March 30, 2016. We know that compañera Machi Francisca is on a hunger strike to demand the justice that the bad government of Chile has denied her by keeping her imprisoned for the crime of continuing to defend the natural resources, sacred places, and cultural rights of her people. They are letting her health deteriorate to the point that it threatens the life of the compañera, whose state of health is summarily delicate.

We denounce the fact that while the Chilean government represses Machi Francisca, they blatantly protect transnational capitalists and bosses such as the landlord Alejandro Taldriz, with his illegal logging that the corrupt state works to protect.

The National Indigenous Congress and the EZLN demand:

2. An end to the repression against the dignified Mapuche people and the revocation of the racist and repressive Anti-terrorist Law that is meant to criminalize the territorial defense of the Chilean Originary Peoples.

3. Absolute respect for the Mapuche territory.