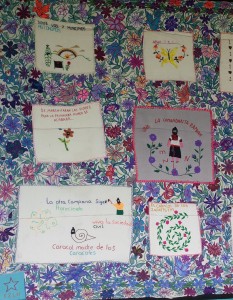 We write to tell you a little about how plans are going for the activities in July, October, and December of 2016. We have received a few questions, so here are a few answers, but only regarding the festival “CompArte for Humanity.”

“How is the registration for the art festival looking?”

21 attendees from Mexico and 5 from other countries.

“What kind of activities or artistic works are registered so far?

“What is this about “alternate sites” for the CompArte Festival?”

We are hoping that the compas of the Sixth in Mexico and in the world understand what you might call the subliminal message of the convocation and organize activities—in their own geographies and in accordance with their own calendars—either before, during, or after the festivals/gatherings convoked by the Zapatistas. That is, we hope that whether at local, regional, zone, or national levels, the Sixth organizes festivals and gatherings to give space for and echo to artistic activities. And of course, also to celebrate the National Indigenous Congress’ 20 years of rebellion and resistance, as well as a space where scientists will find attentive ears and critical thought.

“Is it necessary to register to attend, without participating in, the ‘CompArte’ festival?”

Yes, just clarify that you are registering as an attendee.

“Is necessary to register to attend and participate in the “CompArte” festival?”

Yes, and we ask you to specify the form your participation will take.

“What is the email where one can register for the ‘CompArte for Humanity festival’?”

“Can you tell me again the dates and locations for the ‘CompArte for Humanity’ festival?”

No, those are already in the communiqué from February 29…. Okay, okay okay, here they are:

July 17-22 in the caracol of Oventik. Only Zapatista bases of support will participate in this part. Attendance is open for escuchas [ears/listeners] and videntes [seers/viewers], but requires registration.

“Is there a registration fee, either for attendees or participants?

“Are you (Zapatistas) going to pay for travel expenses, food, and lodging?”

“According to Zapatismo, is gastronomy an art?”

Everyone can categorize their practice as they see fit. In the case of the difficult culinary arts, the insurgentas, as an echo of March 8, will contribute a menu that is…hmm… how can I put it… disconcerting: “tamale shakes and coffee with chili pepper” (note: for the tamale shake they don’t use a blender or any other machine, only the cooking fire and their “wisdom”). I already suffered… I mean, tasted it and it is… disconcerting.

Yes, children can register to participate or attend. Except for the girls, because what a shame, the deadline has passed, it was March 8, so oh well…eh? But it’s that… ay! Okay, okay okay: the girls can register too. Note: all minors should be accompanied by a mother or father or tutor, tutora, or tutoroa.

“Is anything banned from these events?”

Yes, the production, consumption, or sale of drugs and alcohol is strictly forbidden. If you aren’t capable of making or enjoying art without taking something before or during, well your method is mistaken.

“There still isn’t a report back on the Little School?”

No. The questions sent by students are currently being reviewed. When something is ready, we’ll let those interested know.

From the diaries of the cat-dog:

The time of the police (part one):

One: In Mexico, a Latin American country that suffers the global crisis like they all do, but which is fueled by the solid triad of corruption-clumsiness-ignorance made into a government, the official in charge of public education, Aurelio Nuño Mayer, cannot hide his passion for the policing profession. Encouraged by his accomplices, Mr. Nuño believes that he can win the presidential candidacy for his party, the PRI, if he functions more as paid thug than as promoter of Mexican education. Fond of making threats, running his own repressive squads, and operating like any boss in the early stages of savage capitalism, Mr. Nuño finds special pleasure in converting the teaching profession into a destination not for better schools, training, and salaries, but for arbitrary injustices, beatings, and firings. Playing the role of prosecutor, judge, and jury; of Labor Minister (decreeing firings without severance); of Minister of the Interior (using the police and the army at his whim); of clumsy media spokesperson, dismal builder of “spontaneous” support, and twitterer in permanent slow motion, Mr. Nuño’s only resumé merit is having sheltered himself within that group of criminals who engage in criminal activity with total immunity. Despite his suits and ties, his heavily made up and photo-shopped media image, Mr. Nuño cannot hide what he has always been: a sad and mediocre policeman who gets pleasure from and money for repressing and humiliating others. Mr. Nuño has always longed to be a good policeman, but… when the den of thieves is insufficient to accommodate so many, when his secret protector falls, Mr. Nuño will also show he is a good runner… when fleeing becomes the order of the day.

Another one: In this country known in the realm of the world cups (although no further than the quarterfinals) as “Mexico,” in the so-called “highest place of study,” the Autonomous National University of Mexico (UNAM), Mr. Enrique Graue Wiechers has reached the highest bureaucratic position (and ladder to governmental post): the title of rector [like chancellor or dean]. In addition to the fact that his academic and professional career has been located within the bureaucracy of the academy and carefully guided by the Zedillo Ponce de León family’s psychiatrist, Mr. Graue did his graduate work in a North American university know for having invented the energy drink self-named “Gatorade,” which should give you an idea of how advanced he is in his specialty field of ophthalmology. A few days ago, Mr. Graue declared he was “outraged” because of the insufficient quantity of drugs police planted on one of the activists from the Che Guevara Auditorium (which the university authorities are futilely trying to call the Justo Sierra Auditorium). Mr. Graue was not enraged that the federal budgeting for higher education would not be sufficient to cover hundreds of thousands of young people; nor was he enraged by the mercantilist conditions that academic faculty and staff are subjected to; nor was he enraged because the UNAM has become a nest of undesirables, that is, of bureaucratic functionaries who don’t even know how to write the name of their overseer (that is, the rector); nor was he enraged by the lack of security endured by faculty, staff, and students on the UNAM campuses (assaults, rapes, and murders); and he was not enraged because an anti-democratic gangsterism had placed, in the highest post of the “highest place of study,” a mediocre bureaucrat.

No, Mr. Graue was enraged because the police didn’t do a good job of setting someone up to be framed. And this outrages Mr. Graue because all his life he has endeavored to be a good police agent. With his indignant police discourse (seconded by people who don’t even know where the Justo Sierra Auditorium is, much less the Che Guevara), Mr. Graue gives a lecture: “the problem with higher education in Mexico lies with a vegetarian cafeteria, a screen printing workshop, and a bakery training space, among other things. These subversive activities are promoted by a group of anarchists, that is, dirty, ugly, and bad people who contrast sharply with the neatness and style of the university bureaucracy. They don’t even sell Gatorade, but rather water and juices of unknown origin. They are drug addicts (the high, medium, and low-ranking officials hide cocaine, crystal meth, ecstasy, and even crack and an occasional roach in their desk drawers —even within bureaucracy there are classes, my friend), they’re anarchic-anarchists, not part of the university community (various officials swallow hard) and that auditorium… the auditorium, what’s that auditorium… secretary quick, what’s the name of that auditorium that we want to liberate.. ah yes, the Justo Sierra Auditorium in the School of Medicine… eh? …It’s not in the School of Medicine?.. huh?… you’re recording? Give notice!… okay… in the School of Philosophy and Letters of Acatlán… no?… is it in Ciudad Universitaria?…Oh isn’t CU where the Pumas play?…So there are academic departments there too?… I’m only familiar with the rector’s suite… well anyway, wherever it is, it should be “liberated” by the police, and by police who know how to plant the evidence properly, not those scatter-brains that don’t even know how to place a bit of “spearmint” in a backpack. That’s why an elite group of my officials are going to start a degree program on how to place drugs in briefcases. Yes yes I know that’s not the same, but we don’t carry backpacks, we carry briefcases. As I have said… what, no applause?… Turn on the recorder man! No, not that one, you’ll ruin my cabinet career ambitions. The other one! Yes that one! Thank you, thank you to the authentic university community members who know that the university serves to domesticate, not to teach nor investigate! Thank you, thank you, thank you! How was that? Wha? I said turn that recorder off! No not the one with the cheering, the other one, the one that’s recording!

Mr. Graue is furious, he was just trying to be a good police agent.

Copyleft 2016. Permission from the Good Government Council under conditions of “we’ll be back tomorrow to see if its ready, who knows, maybe it will be a new Council rotation by then, but in the meantime let me tell you the history of Zapatista autonomy. You already know it? Well then we should review it, as they say, until it truly sticks in your head. Did you bring your notebook? Write in “resistance and rebellion” or “rebellion and resistance,” it’s the same thing, because the order of the “r’s” doesn’t’ affect our autonomy. Haven’t you studied mathematics? Just songs? Well look, you need arts and sciences, there’s no way around it.”