Why don’t you self-prescribe this?

Why don’t you self-prescribe this?[i]

To the Federal Judiciary Council of Mexico:

The whole time the only terrorists have been those who for more than 80 years have so badly governed this country. You are simply the sink where the genocidaires go to wash their hands and together you have converted the judicial system into a poorly built and clogged latrine, the national flag in a reusable roll of toilet paper, and the national shield into a logo made of undigested fast food. Everything else is pure theater in order to simulate justice where there is only impunity and shamelessness, feigning “institutional government” where there is nothing more than dispossession and repression.

So, prescribe yourselves this: [IMAGE]

Authorized by the General Command of the EZLN

P.S. So, does this mean the Tampiqueño[ii] is now free to leave community and go for some stuffed crabs? He’ll have to pick up the tab, of course, otherwise forget it. So he is free now to do what any other Mexican can do? That is, now he’s free to be exploited, mocked, defrauded, humiliated, disrespected, spied on, extorted, kidnapped, murdered, disappeared, and to suffer all those insults to his intelligence from those who say they govern this country? I mean, I’m asking because this is the only thing the “institutions” guarantee any citizen in this country who isn’t above. 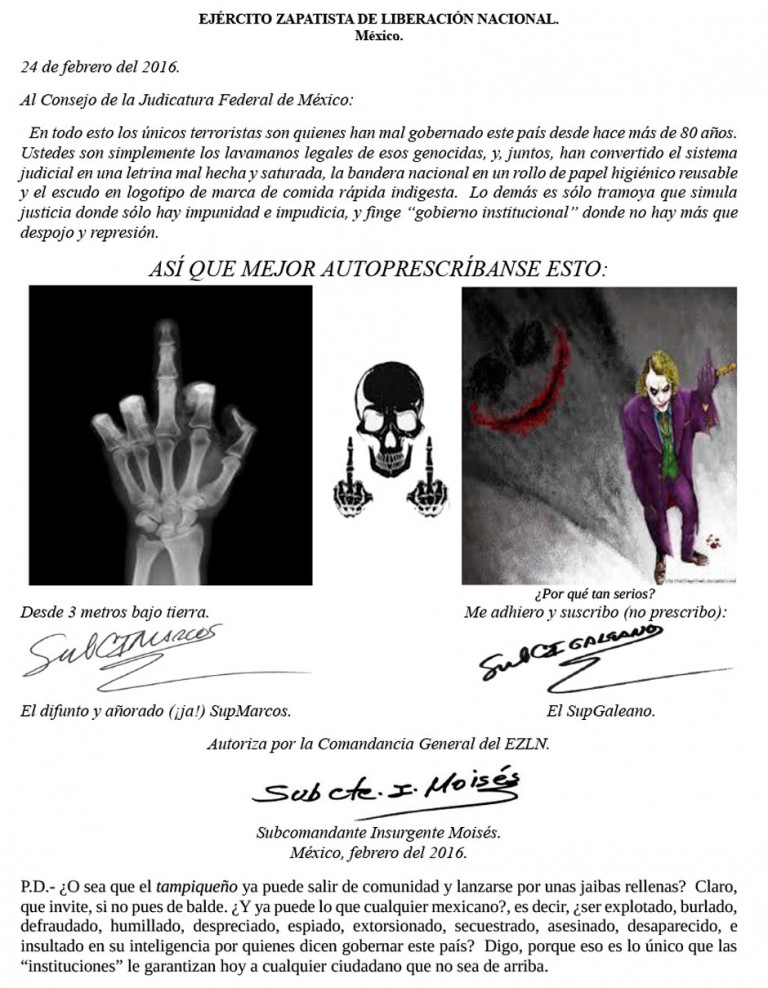 [i] This communiqué is a response by the EZLN to the recent pronouncement by the Federal Judiciary Council of Mexico that concluded that the warrant out for the arrest of (then) Subcomandante Insurgente Marcos for actions stemming from the uprising of January 1, 1994, had expired (“se prescribe” in Spanish), due to the fact that 20 years exceeds the statute of limitations on the crimes for which he was accused. (The charges were terrorism, sedition, mutiny, rebellion, and conspiracy). The EZLN here plays with the double meaning of “prescribirse” (expire and prescribe). The Mexican judiciary says his arrest warrant “se prescribe” (has expired) and the EZLN answers, “why don’t you “autoprescribirse” (self-prescribe)….this.”

[ii] “El Tampiqueño” is the name given by the EZLN to the person who the Mexican government claimed in 1995 was the man behind Subcomandante Insurgente Marcos.