From Pain, from Rage, for Truth, for Justice.

From Pain, from Rage, for Truth, for Justice. 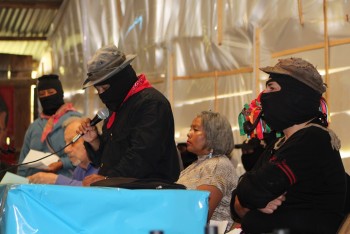 Compañeras, compañeroas, and compañeros of the Sixth in Mexico and in the World:
Sisters and brothers of the peoples of the Earth:

Our collective heart knows, now as before, that our pain is not a sterile sorrow.

It knows that our rage is not some useless venting.

We, who are what we are, know that our pain and rage are birthed and nourished by lies and injustices.

Because for those who are above at the cost of those of us below, lying is a way of doing politics and they adorn death, forced disappearance, imprisonment, persecution, and murder with the scandal of their corruption.

Those above, whatever the color of their politics, are shameless criminals with impunity. It doesn’t matter if they try to hide behind a change of name and flag; it is always the same face, the same pride, the same ambition, and the same stupidity.

It is as if in their acts of killing and disappearing people they want to kill and disappear memory as well.
From above and from those who make their nests of vileness and perversion there, we will only get lies as salaries and injustice as pay.

And like clockwork, lies and injustice arrive every day, every hour, everywhere.

They are not satisfied with dispossessing us of our work, life, land, and nature.

They not only destroy bodies and lives. They also destroy histories.

And on that erased memory they build impunity.

Oblivion is the judge that not only absolves, but also rewards.

This is why our pain and rage search for truth and justice.

Sooner or later we learn that these cannot be found anywhere, not in a book, a speech, a juridical system, an institution, a promise, a time or a place.

We learn that we have to build them.

It is as if the world is not yet complete, as if there were a hole, a wound in its belly, its heart lacerated by the color of the Earth that we are.

That is how we learn that without truth and justice there is no day or night that is complete. No calendar can settle, no geography can rest.

In many tongues, languages, and gestures, we name those who are not among us.

And every pain and rage takes on a name, a face, a history, a void that hurts and infuriates.

The world and its history are thus filled with absences, absences that murmur, speak, yell, cry out.

We do not scream out of grief. We do not cry out of sorrow. We do not murmur in resignation.

Our voice is so that those who are absent find the path of return.

So that they do not forget that they are not forgotten.

Because of this: from pain, from rage, for truth, for justice, for Ayotzinapa and for all of the Ayotzinapas that wound the calendars and geographies from below.

This is why we resist.

This is why we rebel.

Because the time will come when those who owe us everything will have to pay.

Those who will pay are those who were responsible for the persecution, imprisonment, beatings, and torture.

Those who imposed the desperation of forced disappearance will pay. Those who murdered will pay. The system that created, fed, covered, and protected the crimes disguised as bad government will be destroyed. Not prettied up, not reformed, not modernized. Rather, demolished, destroyed, finished, buried.

That is why at this time our message is not one of consolation or resignation for those who are hurting because of one or many absences in their lives.

Our message is of rage and fury.

Because we know that same pain.

Because we have within us the same rage.

Because, being different, we are alike.

Because of pain and rage.

For truth and justice.

And that is why: do not give up. Do not give in. Do not sell out.

In one corner of this planet called “Earth.”

This September 26, thousands of Zapatista children, young people, women, men, otroas, elders, alive and dead, will mobilize in our territories in order to embrace those people who feel pain and rage because of imprisonment, disappearance, and death imposed from above.

We embrace them in this way because that is how we Zapatistas embrace each other.

Thus we call upon all those honest persons on the planet to do the same, in their calendars and geographies, according to their ways and times.

Because as long as they try to make lies and mockery stand in for the lack of truth and justice, humanity will continue to be a grotesque grimace on the face of the Earth.