First Report on the Progress of Reconstruction in La Realidad Zapatista 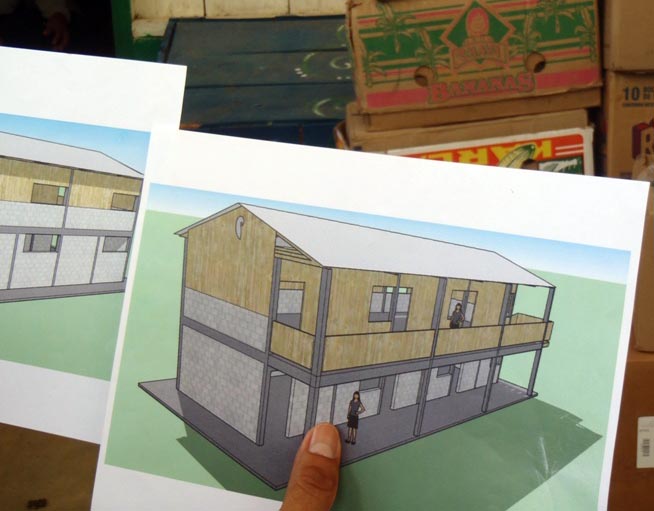 (Clarification: according to some bad information that we received, the compas from the free, alternative, autonomous, or whatever-they-call-themselves media weren’t going to be able to to make it to the closing and resolutions of the first Exchange (and so wouldn’t be able to report on the ongoing work for the reconstruction of the school and the clinic destroyed by the paramilitaries from CIOAC-Histórica). The rationale, motive, or reason for this was that they didn’t have the cash, the coin, the bucks, the bills, the money, the financial support, the liquidity, the economic solvency, the credit, etc., to get here. For this rationale, motive, or reason, “the Odd Ones Out [Los Tercios Compas],” who are always ready to support the compa media, mobilized a special multimedia, multitask, multidisciplinary team – very cutting edge – with their morraletas [cloth shoulder bags] stuffed full of gigabites and pozol, to take pictures and do interviews to circulate about the events. Then during what they call the “post production” phase of their informative material, we received different information telling us that the compas from the alternative media did in fact have the means, the manner, the bizness to be able to get here and do their work of spreading information far and wide about what is happening here. That is, they were coming afterall. That is, all that work for nothing. In any case, we are sending you the material, for whatever it’s worth. Here goes.)

Interview conducted on August 5, 2014, in the afternoon (that is: after pozol), in the Zapatista community of La Realidad, in the mountains of southeastern Mexico. Climatological conditions: the heat was fierce, the skimasks were almost unbearable, but what can you do.

Compañera: What is your work?

Compañera: I have a question. How is the construction of the school going?

M: We began the construction of the school on the 31st of last month, and so it has only been going on for a few days. It hasn’t even been a week, it’s really just beginning. We are only just now starting with the installation of the iron bars, which are the primary base. The construction will require 25 or 26 bars altogether, and we have just finished installing six of them. This is what is currently happening with the construction; it has only just begun. It’s only been six days since we started.

Compañera: What materials do you still need?

M: We now have almost all of the materials that we need. We have already bought them from the hardware store; everything’s ready. All that we missing are some of the materials that haven’t yet arrived here in the community of La Realidad. That is, we already have all of the metal rods, the wire rods, all of that. Now we are waiting for the cement blocks to arrive – 430 sacks of cement and 9 bundles of laminate (Note: one bundle has ten sheets of laminate bundled into a single packet), and some nails for the construction of the house. That is what we are still waiting for here in the community in terms of materials. Most of the materials that we need are already here in La Realidad.

Compañera: And when will the construction be finished?

Compañera: And how is the work organized?

M: Well, here we organize our work such that we take turns. We take turns depending on how many helpers the master builders, the masons, need. If they say, ‘well this day I need 10 helpers, the next day I need 8,’ then we send the number of they ask for, taking turns. We might send 8 people today and another 8 a different day, and that is how it goes depending on how many people the master builder says that they need. That is how we are organized. It is the community of La Realidad who are doing the work here now; we are working and the masons, who are compañeros, are directing the work. This is how it is organized.

Compañera: How do you think the construction is going to turn out?

M. Well, the master builders, the masons, asked us what we wanted the building to be like, what type of house we wanted built. So we told them how we wanted it to be, with two stories. We had someone who is an architect draw up a design according to what we said that we wanted. We have some of the drawings here for you to see, they show what it will be like, that is, the model or the type of house. And this is the type we chose. This drawing in my right hand is what it will look like from the front and in this one in in my left hand we are looking at it from the back. This is the model, how the house will look when the construction is finished. This is how we thought the building should be.

Compañera: And this big building that we are looking at, what will it be used for?

M: Well this building, as of a long time ago – before this problem of what happened on May 2had come about – for a long time we had been thinking about this building. The community had gotten organized and decided to make a collective store for both compañeros and compañeras. We had said: let’s build a house divided into two rooms. One room will be for the compañeras, for them to use, with all women’s clothes, and one for the compañeros. We had already made this plan, to build a collective store for the community of La Realidad. But then we had this problem and when it happened we said…and now? They destroyed our school; they destroyed our health clinic. Now what were we going to do? And so we as the community of La Realidad began to discuss what we were going to do. There were proposals to repair the school, rebuild it and fix it up, but others said: No, hell no. We are not going to try to build it. And so we began to think together, to look at the proposals and ask – but why? For those who say that we should repair it, why should we? And for those who say no, why not? We had to find a solution, a way forward where we say: this is how it is going to be. Why? The motive, that is, the reason, is because we decided that we are not going to cry for what they destroyed, and we won’t let it be an obstacle to our education. No. If they destroyed this school, we will build another one. Not for lack of a school will we cease our education. Right now we don’t have a school, so we will have to either borrow a house or take turns teaching our children in our houses. And we are going to leave this school as it is, so that for their entire fucking lives, those guys, those ciaoaquistas, can see the chaos, the assassination that they carried out, and later, the children of these ciaoaquistas will see the school and and ask why it is like that. And what a story those parents will have to tell their children, even if they claim ‘well, I don’t know.’ These children will realize what their parents did, and they will have to decide, ‘will I do this kind of thing, or will I do things differently?‘ The children will decide their own paths, make their own choices, decide whether they will do the same things their fathers did. So this is why we said we will leave this school as it is, and search for another place to build. And we decided that so that the children aren’t left without education for now, we will use that spot where we were going to build the store for a school instead. And the community approved the idea. And that is how we left it, now we aren’t planning a store anymore. Now we are planning a school, a schoolhouse. We realized we aren’t going to have those two rooms after all, but that is what we decided, that this building would be a school. So this building is now destined to be a school, and in the meantime, the children aren’t studying, they aren’t going to class right now. For now the house is designated as a place to stay for the brigades that come to help with the construction of the autonomous school, but now that house that you are looking at is destined to be a school

Compañera: Okay, very good compañero. Thanks so much for talking to us.

Reporting for “The Odd Ones Out” [Los Tercios Compas]: Airwaves Insurgent compañera Angelina on microphone and Infantry Insurgent compañera Erika on camera. While we wait for official permissions from the Junta de Buen Gobierno, consensual and responsible reproduction is permitted, as is coronary circulation (it’s good for the heart) and the unobstructed rise and fall of what they call the upload and download.