Only 500 years later
Words of the Zapatista Peoples

The Zapatista communities speak through our voices.

Thank you for having invited us.

Thank you for having welcomed us.

Thank you for having housed us.

Thank you for having fed us.

Thank you for having taken care of us.

But above all, we’d like to express our gratitude for the fact that despite differences and obstacles you have all agreed to what we’re doing today. Perhaps it seems small to you, but for us Zapatista communities it is huge.

We are Zapatistas of Mayan descent.

We are from a geography called Mexico, and we crossed the ocean to share these words with you, be with you, listen to you, and to learn from you.

We are from Mexico and in and with you we find love, care, and respect.

The Mexican state and their administrations don’t recognize us as citizens of this geography. We are strangers, foreigners, undesirable and unwelcome in the same lands that were farmed by our ancestors.

For the Mexican state we are “extemporaneous.” That’s what it says on the birth certificates that we managed to obtain after we made many trips and incurred many expenses on visits to the offices of the bad government. And we did all that to be able to come to where you are.

But we didn’t come all this way to complain or even to denounce the bad government we have to put up with.

We only share this because it is this same bad government which has demanded that the Spanish State apologize for what happened 500 years ago.

You should understand that in addition to being shameless, the bad government of Mexico is also ignorant of history, twisting and adapting it to its liking.

So let’s leave aside the bad governments that each of us have to put up with in our geographies.

They are just overseers, obedient employees of a greater criminal.

Those of us who make up the Zapatista Maritime Squadron, known as the 421st Squadron, are here in front of you today, but we are just the first wave of a much larger group. There will be up to 501 delegates. There are 501 of us just to show the bad governments that we are ahead of them: while they simulate a false celebration of 500 years, we [nosotros, nosotras, nosotroas] are already heading towards what’s next: life.

In the year 501, we will have explored the corners of this rebellious land.

END_OF_DOCUMENT_TOKEN_TO_BE_REPLACED 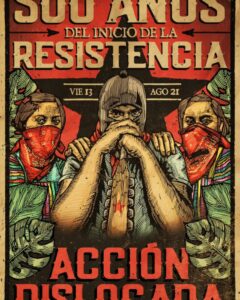 First results of the Popular Referendum

To the victims and families of victims in Mexico:
To the organizations, groups, collectives and individuals who support the victims:
We present the first results we have received from the Popular Referendum:

1. As of 13:00hrs on July 31, 2021, the twelve Zapatista caracoles and their respective Good Government Councils have received the official decisions of 756 small towns, villages, communities and rancherías [rural farming communities] where the following Mayan languages are spoken: Zoque, Tojolabal, Mam, Tzeltal, Tzotzil and Ch’ol. The decisions come from Zapatistas, CNI communities and partidista [political party-affiliated] communities which came together in “extemporaneous” community assemblies, which is to say that they do not have an official, legal existence.

2. The 756 originary communities have said “YES” in response to the question of whether they agree that whatever is necessary should be done to respect the rights of the victims and their families to truth and justice.

3. What we have noticed up to now is that in many areas, the INE [National Electoral Institute] did not translate the referendum into Mayan languages. The INE did not explain what the referendum is about and in some places it simply dropped off ballot boxes without explaining to the townspeople what they are.

To our surprise, some partidistas communities where there are no Zapatistas held and continue to hold assemblies, and they have sent and continue to send their results to the Good Government Councils.

The partidista communities have thanked the Good Government Councils for explaining the referendum, and have said they will go to the polls tomorrow and will send us the count of how many people from their communities participated in the referendum with their official ID cards.

The gap created by the absence of representatives of the Mexican government and its institutions is being filled by “extemporaneous” individuals who took it upon themselves to translate the referendum into their originary languages and to explain what the referendum is about and its importance.

Not only did no one from the INE show up to explain anything: no one in any government capacity deigned to even try to go to any community (even though the government is supposedly the interested party in the referendum because their overseer ordered it).

The only thing the government officials have done is threaten people by saying that if they don’t go “vote” in the referendum, then their government support programs will be “cut.” They were sent to say: “If you don’t want to lose your cash handouts, go and put down ‘yes.’”

In addition, the government is lying because when it tells people to just go and vote “yes,” it says that the referendum is about whether to take the former presidents to trial.

Instead of explaining things to the people, they resort to threats and lies.
All that was needed was a bit of self-respect and political work.

5. Even though according to the Mexican state they do not exist, the thousands of “extemporaneous” indigenous communities embrace the thousands of families of the victims of the decisions made at different levels of government in recent years.

6. Although we do not legally exist according to the Mexican government, we ask you all – victims, families, and organizations that support them – to accept this embrace from those who have spent centuries (up to the present day) being victimized by the “decisions of political actors” of all governments across the entire political spectrum.

When we have the complete results, we will ensure they are shared with those who struggle for truth and justice for the victims and their families.

With this communiqué we announce that the Zapatista communities, as of July 31, 2021, are initiating their participation in the National Campaign for Truth and Justice.

From the mountains of the Mexican Southeast.
Subcomandante Insurgente Galeano
Zapatista Sixth Commission for the National Campaign for Truth and Justice
Mexico, July 2021

END_OF_DOCUMENT_TOKEN_TO_BE_REPLACED

Summary: A call to participate in the Consultation with the victims in mind. Going to the polls. It is suggested that if you dislike or distrust the Supreme, and rightly so, and think that your participation would be used to legitimize those from above, or that that it is a rehearsal for a later consultation which would extend the mandate of the executive, or that is a waste (yet one more) of pay, or that what the Supreme wants is to negotiate with the exes to bring down the bad vibes a notch, or it is demagoguery pure and simple, then don’t go to the polls.

Instead of this, it is proposed that you write a letter, either individual or collective and that you send it off to an organization of victims, telling them that you honor their pain and that you support them in their demands for truth and justice. Or a newspaper column, a tweet, a comment on your blog, in your newsletter, on your facebook, instagram, or wherever. Or a painting, a song, a mural, a poem, a speech, a sonata, a pirouette, a figure, a play, some art. Or an article of analysis, a colloquium, a lecture, a conference, a seedbed. Or whatever occurs to you. And even more, to make your non-conformity clear, do it extemporaneously, say one or several days after August 1st, and continue it for the rest of the year and the following years. It is stressed that you must get organized because, without even knowing it, you make up part of the future and probable victims of “the political decisions made in the present and coming years by political actors” of the Mexican State. It is that or resign yourself to the fact that when you are the victim, the “political actor” responsible for preventing this from happening to you, of investigating, pursuing, and punishing the guilty parties, declares the you “asked for it,” that he condemns the act and of course, it will be investigated “to the ultimate consequences, regardless of who falls” — as your name, and your personal story, pass into a number and a statistic.

First: The Zapatista communities will participate extemporaneously in the so-called “Popular Consultation,” following the usos y costumbres of the indigenous peoples, with community assemblies. The results will be sent to the organizations of victims of violence, the search for the disappeared, and prisoners of conscience. Those who have the INE (National Electoral Institute) credential (in fact there are very few), will go to the polls. We ESPECIALLY call upon our indigenous sisters and brothers, organized in the National Indigenous Congress-Indigenous Governing Council to participate also, according to their times and ways, without losing sight of the victims, and holding present all of the murdered brothers and sisters and communities that have been victims of the decisions of those from above before and now, like the long history of plunder, of deceit, of mockery and of contempt, of destruction of territories and disappearance of indigenous languages and cultures.