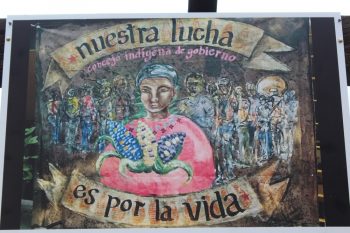 Mexico City, 2 May 2018.- Today at noon a press conference was held by the National Indigenous Congress, the Indigenous Governing Council (CIG), and the Sixth Commission of the Zapatista Army of National Liberation, where they announced the aggreements of the CIG’s second work session (held on April 28 and 29 in Mexico City).

Communiqué by the CNI-CIG-Sixth Commission of the EZLN, in the voice of María de Jesús Patricio (Marichuy).

Words by Carlos González, of the Indigenous Governing Council.

Evaluation by council members regarding the achievements and difficulties of the CIG’s tour in Mexico (4’33 min.)

Communiqué by the CNI-CIG-Sixth Commission of the EZLN:
(Source: Enlace Zapatista)

WHAT’S MISSING IS YET TO COME

To the CIG and Marichuy Support Networks:
To those who participated in the Civil Association entitled, “The Hour for Our Peoples to Flourish Has Come”:
To the National and International Sixth:
To the Mexican people:
To the free, autonomous, alternative and independent media:
To the national and international press:

Faced with the intensification of war, dispossession, and repression in our communities, and as the electoral process advances, we, in accordance with the path walked by our spokeswoman Marichuy together with the councilmembers of the CIG [Indigenous Governing Council], respectfully address the Mexican people to say:

We hear the pain of all the colors we are, all of the colors which make up Mexico from below.

Under the pretext of collecting signatures, we traveled throughout the indigenous territories of our country where together we grew our political proposal from below, and through this process made visible the struggles, problems, and proposals of many originary peoples.

Through our participation in this electoral process, we reiterated to the indigenous and non-indigenous peoples of Mexico that we will not be silent while those above steal and destroy our land, which we inherited from our grandparents and which we owe to our grandchildren. We will not remain silent while they poison rivers and blow holes in mountains to extract minerals; we will not sit idly by as they turn the peace and life that we have been building every day into war and death via the armed groups that protect their interests. Have no doubt: our response will be organized resistance and rebellion to heal the country.

With the massive mobilization of thousands and thousands of compañeras and compañeros from the support networks around the country, we realized, and it became shamelessly clear, that to get on the ballot we would have had to prove ourselves as bad as or worse than those above. If we collect signatures, they must be fraudulent or else they won’t count; if we spend money it should come from a shady source; if we say anything it has to be a lie; if we come to any serious agreements, they must be with corrupt politicians, extractivist corporations, bankers, or drug cartels, but never, ever, with the Mexican people.

Getting on the ballot is only for those who seek to administer power from above to oppress those below, because the power they seek is rotten to the core.

It’s a competition that can be won with deceit, money, and power, as the political class’ elections are merely a commodity. There is not nor will there ever be room there for the word of those below—those who, whether they are indigenous or not, despise power and build democracy by making collective decisions which then become a form of government in the street, barrio, town, ejido, collective, city, or state.

The electoral process is one big pigsty where the competition is between those who can falsify thousands of signatures and those who have billions of pesos to coerce and buy votes. Meanwhile, the majority of the Mexican people are caught between poverty and misery.

That’s why our proposal isn’t like theirs. That’s why we’re not campaigning, falsifying signatures, or collecting and spending the monies that the people of Mexico need to meet their basic needs. That’s why we don’t need to win any election or get involved with the political class. Rather, we’re in search of power from below, born of the pain of the peoples. That’s why we’re seeking out the suffering of all the colors that make up the Mexican people: that’s where hope lies, in a good government that rules by obeying and which will only be able to emerge from organized dignity.

The racism inherent in the political structure is not the only thing that kept our proposal off the ballot. Well, even if those who oppose the destruction wrought by the capitalist system on the world had different eyes, whether they were blue or red, public policy and this supposed democracy would still be meant to exclude them.

The originary peoples and those of us who walk below and to the left don’t fit in their game. This is not because of our color, race, class, age, culture, gender, thought, or heart, but rather because we are one and the same with the Mother Earth and our struggle is to stop everything from being turned into a commodity, as this will mean the destruction of everything, starting with our destruction as peoples.

This is why we struggle and organize ourselves. This is why not only do we not fit into the structure of the capitalist state, but we also feel more disgust each day for the power above which makes its profound contempt for all Mexicans more obvious by the hour. Our peoples are facing a very serious situation, a situation which has only gotten worse in recent weeks as repression and displacements have increased, and this has been met with complicit silence by every candidate.

As a consequence, and as agreed upon during the second working session of the Indigenous Governing Council which took place April 28-29 in Mexico City, neither the CIG nor our spokeswoman will seek or accept any alliance with any political party or candidate, nor will they call for people to vote nor for people to abstain from voting. Rather, we will continue to seek out those below to dismantle the rancid power above. Whether you vote or not, organize yourselves. We will walk forward by building the keys to heal the world.

Among the originary peoples of this country—where the formation of the Indigenous Governing Council was decided, and where our spokeswoman walked, weaving bridges as she was mandated to do by the general assembly of the CNI—we find the resistances and rebellions that give shape to our proposal for the whole nation. For this reason, we traveled together with the councilmen and councilwomen from every state and region through their geographies, where every day people face war and the invasion of the capitalist monster; where people are expelled from their land so that it can be taken out of collective hands and transferred into the hands of the rich, so their territories can be occupied and destroyed by mining companies, so the aquifers can be devastated by fossil fuel extraction, so the rivers can be poisoned and the water privatized in dams and aqueducts, so the sea and air can be privatized by wind farms and aviation, so native seeds can be contaminated by genetically modified seed and toxic chemicals, so cultures can be turned into folklore, so territories can be configured for the ideal functioning of international drug trafficking, and so that organization from below can be suppressed by the terrorist violence of narcoparamilitaries at the service of the bad governments.

We saw ourselves reflected on paths illuminated by the worlds that have preserved their cultures, where the words and plans of all the indigenous peoples are being drawn, and where from each struggle and each language arise the fundamental reasons for the existence of the Indigenous Governing Council.

That’s where we see the glimmer of hope we set out to find. We also see it in the parts of civil society organized as the Sixth and in the CIG Support Networks and groups that stepped forward not only to show their solidarity and create an agenda for the whole country, but also to build, from below and out of these capitalist ruins, a better country and a better world. We have deep admiration and respect for all of them.

We call on all the women and men of the Mexican people, all the compas from the CIG Support Networks in all the states of the country, and all the compañeras and compañeros who made up the “The Hour for Our Peoples to Flourish Has Come” Civil Association to continue their process of discussing and evaluating our work, making assessments, and finding and walking the paths we decide upon, always organizing ourselves, regardless of whether we vote or abstain from voting for any candidate. Your words, feelings, and proposals are important to us.

We will continue to extend respectful bridges toward those who live and struggle in order to together grow the collective word that helps us resist injustice, destruction, death and dispossession, and to reweave the fabric of the country with the consciousness of those below who dream and rebel with their own geographies, cultures, and customs.

The collective proposal of the peoples contains our word that we share with the world. We will continue walking further below, towards the indigenous peoples, nations and tribes we are. For this reason we call for a General Assembly of the National Indigenous Congress in October 2018 in order to announce the results of the evaluations by the originary peoples who make up the CNI, and to advance on the next step.

Sisters and brothers of the Mexican people and the world, let us continue together, as what’s missing is yet to come. 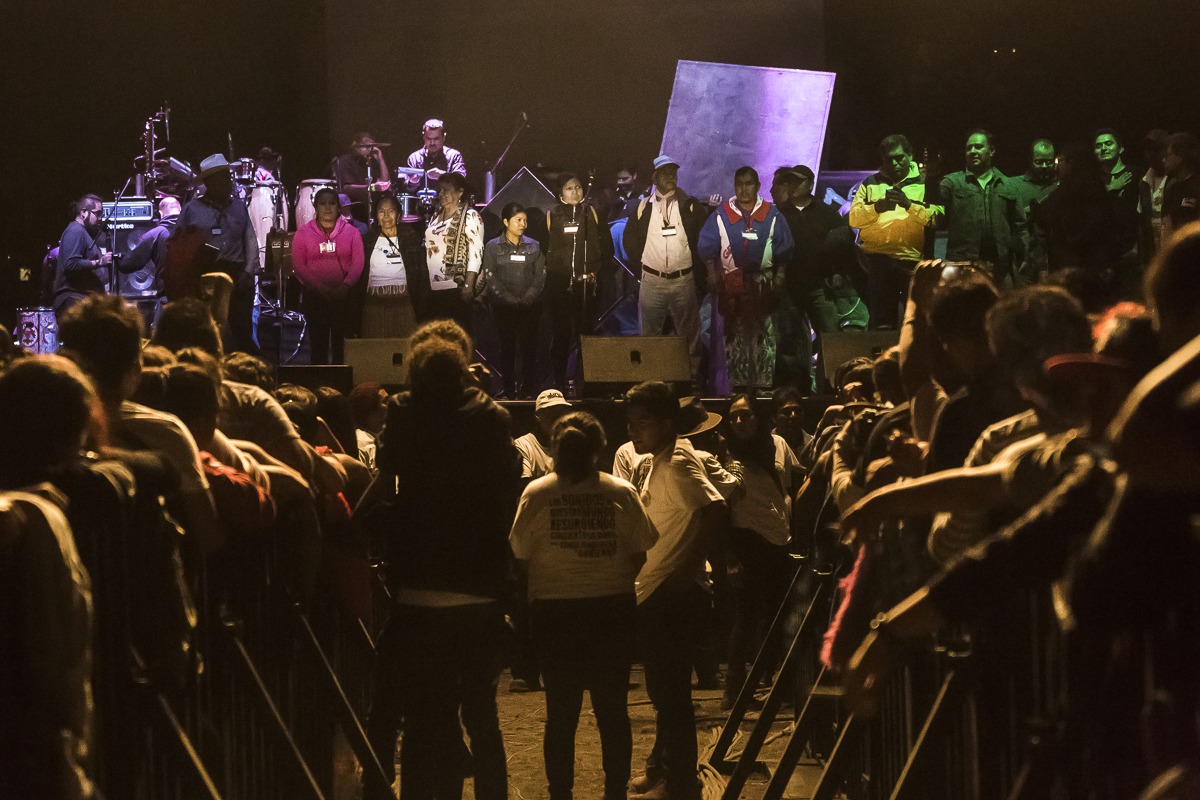 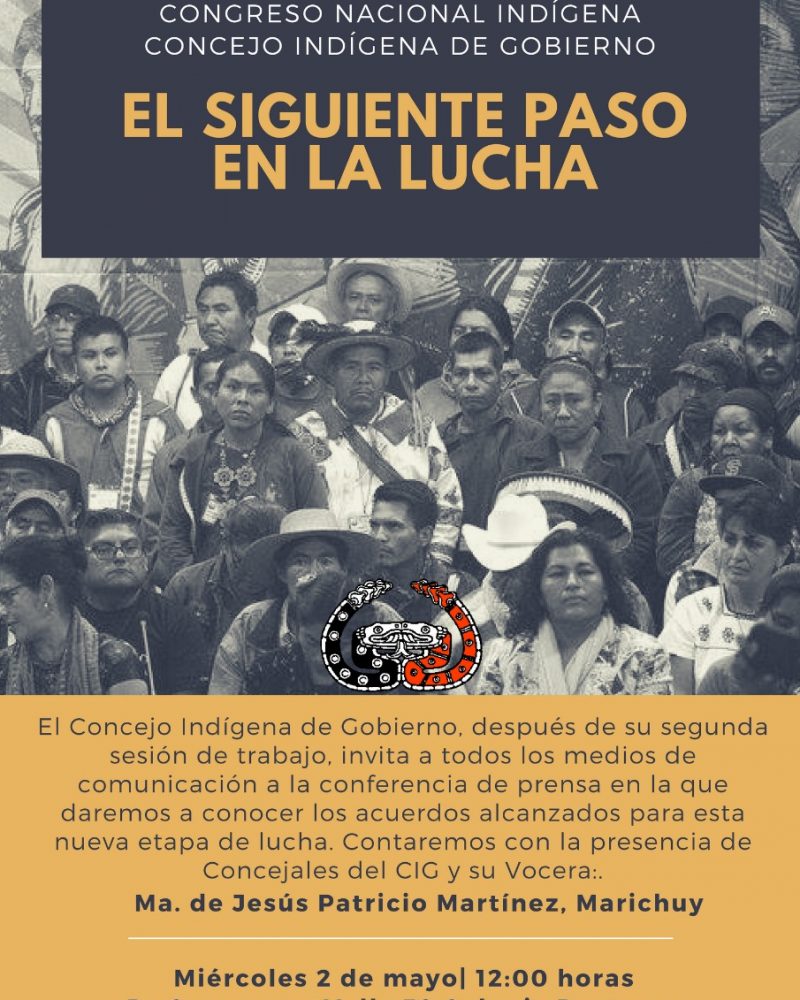