Attempted murder against Margarita de las Nieves and Santiago Ponce, widow and brother of Manuel Ponce Rosas, kidnapped, tortured and murdered in Guerrero, in the context of a growin militarization and repression in that state. Interview with Vidulfo Rosales from the Human Rights Center of the Mountain Tlachinollan and words by Javier Monroy of the Taller de Desarrollo Comunitario in Guerrero, in the Encounter against impunity and for autonomous justice 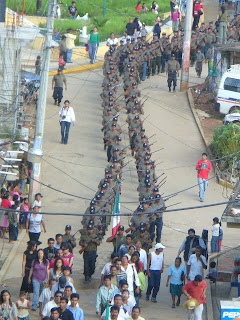 On a large patio of a community in the sierra of Guerrero, surrounded by mountains and forests, stand hundreds of peasants with their weapons held high. Among them there are many youth and quite a few elders. Their weapons are very simple, their equipment, precarious. It is the Community Police, one of the most important projects of indigenous autonomy in Mexico, which, on October 14 and 15, 2008, celebrated their 13th anniversary in this town of Tilapa, municipality of Malinaltepec accompanied by commissioners and representatives of the Regional Coordination of Community Authorities (CRAC) and several dozen visitors: activists, researchers, members of alternative media, and organizations in solidarity.

Thirteen years after its foundation, the Community Police, which together with the justice system represented by the CRAC is one of the most important experiences in indigenous autonomy in Mexico, has every reason to celebrate. The insecurity and violence that in the 80s and 90s devastated the region is today under control. But more importantly, there is now a widespread awareness that the communities can solve their own problems without waiting for answers to come from the outside.

The sierra of Guerrero has a long history of rebellion. It is the land of the guerrilla movements of Genaro Vázquez and Lucio Cabañas and of a long tradition of indigenous and peasant organization. It is also the land of one of the most brutal repression campaigns in modern Mexico. The counterinsurgent violence of the 70s created a deep social instability which led to an uncontrollable situation of insecurity: assaults, robbery, rape, murder. In the face of this violence, the despair of the inhabitants met only with indifference on the part of the authorities, or outright complicity with the delinquents.

As a response to this situation, on October 15, 1995, the communities decided to create the Community Police, composed of voluntary members who serve their people without any remuneration. Today, there are over 800 policemen from 73 communities, and insecurity has diminished over 90 percent. Father Mario Hernández Campos, who participated in this experience since its beginnings, described the process:

“Given the violence and insecurity we lived, our communities responded assuming a role we had never assumed: that of being subjects. Becoming aware that the solution doesn’t come from the outside. But in order to get there we had to do a lot of work, we had to hold many assemblies y many communities. How many of you participated in brigades, going from town to town. How many participated in those meetings that went on till 3, 4 in the morning… How many women making tortillas, cooking beans, how many men carrying firewood, how many neighbors supporting us. Thus we started to learn that we are subjects and that we are responsible for the solutions we look for.”

This awareness also explains the fact that the Community Police was not conceived in isolation, but as part of a much broader project which aims at resolving the communities’ most pressing problems: communication, education, justice. These efforts resulted in some important victories. The demands of the communities led to the construction, albeit defective, of the Tlapa-Marquelia road four years ago (the signs that boast the kindness of the government that “does provide” are intact; the road is destroyed). Very significantly, on October 12 last year was inaugurated the Intercultural University of the Peoples of the South (Unisur), an autonomous university which aims at preparing intellectuals with deep ties to the communities, and which today has four campuses: Santa Cruz del Rincón, Cuajinicuilapa, Xochistlahuaca, and Xalitla. And during the event this October 15, the community radio that has been transmitting for two months from the community of Espino Blanco, was formally baptized “The voice of the people.”

During the first years of its existence, the Community Police detained the delinquents and handed them over to the authorities. But Cirino Plácido, one of the founders, explains that the corruption of government institutions meant that a few days later the delinquents would be free. “Insecurity is a great business for the State,” he says. “The policeman wants money, the lawyer wants money, the judge wants money.” This reality led to the decision to create, in 1998, the Regional Coordination of Community Authorities, which is in charge of administering justice. It is this body which receives complaints, analyzes denunciations, emits arrest orders, and presents the detainees to the community assemblies, where, according to traditional custom, it is the people who decide on the punishment.

This punishment is neither fines nor jail, but what they call reeducation. This consists of community service such as paving roads, building infrastructure or anything else that the community might need. An important aspect of this reeducation process are the talks given by the elder council, which gathers regularly upon the commissioner’s request. These talks help the detainee to become aware of his or her errors. As in the case of the sentencing, the liberation takes place in an assembly, where the community commits itself not to treat him or her as a criminal, but as a member of the community in the process of reeducation. In other words, justice is understood as something that directly involves every member of the community.

The government’s response to this experience in community autonomy has been confrontation and criminalization. Over 40 authorities and community policemen have warrants for their arrest for the presumed crimes of illegal detention, usurping functions, and abusing authority. Curiously, what most bothers the government is not the existence of an armed organization outside of official institutions, but the administration of justice according to traditional customs. This opposition reveals the conflict between the “legality” of a system that the communities do not perceive as legitimate, not only because of its corruption, but because it does not reflect their reality, and the legitimacy of an autonomous experience that does not fit in the laws imposed by that system.

According to anthropologist Gillermo Bonfil Batalla, there is not only one Mexico but two: what he calls the “imaginary Mexico” (based on Western civilization) and the “deep Mexico” (based on indigenous civilization). Cirino Plácido says something similar: “They say there’s only one Mexico but that’s not true. There’s the Mexico that’s out there, but you only need to come here to realize there’s another Mexico, the forgotten Mexico.”

Among the murals by Diego Rivera that cover the walls of the National Palace in Mexico City there’s one that all visitors stop to look at. In it we find the image of an indigenous woman (with Frida Kahlo’s face) carrying a dark-skinned, blue-eyed baby on her back. “The first Mexican,” explains the tourist guide. In other words, the product of the encounter between Western civilization and indigenous cultures. An undoubtedly terrible encounter, but which supposedly engendered the great Bronze Race, the mestizo nation for centuries denied, which the Revolution managed to liberate from the shackles of history by recognizing our glorious pre-Hispanic past as a constitutive element of who we are today: a united, homogeneous, mestizo Mexico. But, in to this vision, where do indigenous peoples fit?

In a small, roadside restaurant on the way back from the Guerrero sierra towards Mexico City, in the heart of the Mixteca sierra of Puebla, the radio plays a dramatized version of a short story: an anthropology student from the US travels to Chiapas to study the Tzotzil Indians. Their customs and their life conditions horrify her, and the listener cannot help sympathize with her views: superstition, poverty, poor hygiene, primitivism. But when she decides to name her thesis “The savage condition of Mexican Indians,” Mexican nationalism rears its head in indignation: who does this racist gringa think she is? A rather difficult indignation to reconcile, given the previous conclusion that yes, Indians are primitive. Fortunately, a humble mestizo doctor, who travels from town to town, comes to the rescue. When he politely questions the appropriateness of the title, the student says, “But Indians live outside of civilization!” And the doctor responds, “Yes, that’s true. But that’s not their fault. It’s our fault, all of us.” Moral of the story: indigenous peoples of today are the unfortunate remnants of a destroyed past, and it is the duty of mestizo Mexico to civilize them in order to integrate them to the nation.

Bonfil Batalla proposes that things are not quite that way. He claims that what we have is the clash between two different (Western and indigenous) civilizations, and that Mexico’s history is the history of this conflict: the attempts on the part of the winning civilization to negate and destroy the vanquished one, and the latter’s mechanisms of resistance which have allowed it to survive for over five centuries. The ideology behind the mestizo nation represented by that “first Mexican” in Diego Rivera’s mural is just one more genocidal attempt against indigenous peoples, from which they defend themselves with the centuries-old arsenal of their civilization.

This clash of civilizations and the imposition of one over the other is evident in the experience of the Community Police of Guerrero. In its 13 years of existence, it has managed to accomplish what the state has failed to do anywhere in the country: to control insecurity in a region that was particularly violent. One of the work sessions in Tilapa focused on the national situation of security and justice. In it the participants evaluated where Mexico is today: an unprecedented explosion of insecurity and violence, militarization of the country, a law enforcement and justice system with a severe credibility crisis, a politics of fear manipulated by the media, and the criminalization of social movements. The state has not only failed miserably in the war against insecurity, but its relations with the drug trade and organized crime have become increasingly evident. That being so, it is at least paradoxical that the state, instead of coordinating efforts with this successful organization and promoting its growth in other parts of the country, insists in criminalizing it.

Like the Zapatista communities in rebellion, the experience of the Community Police is clear proof that this other Mexico, the deep, forgotten and ignored Mexico, is a live source of alternatives capable of facing the problems that most affect society. And if the Mexico in power, following its centuries-old tradition of denying that other reality, continues refusing to recognize its vitality and relevance, the Community Police will continue to serve as an inspiration for all of those from below, in Mexico and the world, and proof that it is indeed possible to create alternatives outside the system, learning from these peoples who have been resisting for over five hundred years.