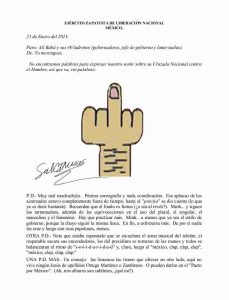 For: Alí Babá and his 40 thieves (governors, head of government, and boot-lickers)
From: Yo merengues

We couldn’t find words to express our feelings about your National Crusade Against Hunger.[i] So, here it is, without words:

P.S. Very poorly done, boys. Terrible choreography, and badly directed. That applause by the people you hauled out there was totally off queue, even the “preciso” realized it (which is saying a lot). Remember that the substance is the form (or was it the reverse?) Hmm… and the stuttering continues, in addition to errors in the use of the plural, the singular, and the masculine and feminine. You should practice more. Hmm…unless this is now the government’s style, because la chayo[ii] used to do the same thing. Anyway, give it more effort. Already no one really believes you and then with this foolishness, even less.

ANOTHER P.S. Honestly I was expecting that we’d hear the musical theme from the telethon, that the respectable folks would take out their lighters, those on stage would stand hand in hand and everyone would sway to the rhythm of “s-o-l-i-d-a-r-i-d-a-d,” followed by, of course, “mexico clap clap clap,” “mexico clap clap clap.”

ONE MORE P.S. A piece of advice: you should send those handouts somewhere else, there is no Jesús here with the last name Ortega Martínez or Zambrano.[iii] Or you could give them out in the “Pact for Mexico.” (Ah, my jokes are sublime, are they not?)
————————
[i] Enrique Peña Nieto recently announced what he calls his “National Crusade Against Hunger,” and inaugurated this crusade in Las Margaritas, Chiapas, area of Zapatista influence.

[iii] Jesús Ortega Martínez and Jesús Zambrano are all members of the PRD that have agreed to become part of the “Pact for Mexico,” a political agreement regarding national political priorities made between all three principal political parties, the PAN, PRI, and PRD.