On Tuesday June 12, members of Occupy Wall Street organized a protest and stormed the Mexican Consulate in New York to demand the release of Francisco Sántiz López and Alberto Patishtan. Here is a quick chronicle of the action: 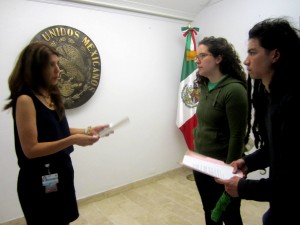 During our protest, members of Occupy Wall Street tried to enter the Mexican Consulate. Our first problem was with security, when we were refused entrance to the Consulate because we did not have an appointment. The security guards refused to let us inside, telling us that the Consul Carlos Sada was not there and that we would need an appointment to speak to him. We responded by telling them, “ We are Occupy Wall Street… We don’t make appointments; We occupy.”

We were there to be a strength of solidarity to the week (indeed the second week) called for by Movimiento por Justicia del Barrio to demand the release of Francisco Sántiz López and Alberto Patishtan, two activists being held by the Mexican government as a matter of political repression (and not criminal justice).

Through the front door of the Consulate is a security checkpoint. Our intentions to hand-deliver our letter of support got known by the security officers and we were not allowed onto the main floor. We told the officer that we were there send a message and would wait for Carlos Sada in order to do so to him directly. After a lot of stalling and lying, the officer was saved by a call on his phone that a Consular official would see us. It was not Sada.

Julieta Dominguez, of Administrative Affairs, received us in a side room. She took the letter, bore our complaints and demands with a smile, and said that Mr. Sada would get the letter and would reply within a week.

When we asked if she was familiar with the cases of Sántiz López and Patishtan she responded that she was not. We explained some of the details of the cases of these two political prisoners and expressed our deep solidarity with their struggle as people who fight in our part of the world against the 1%, often facing false imprisonment at the hands of a violent State.

Whatever the chances of our getting a reply within the week, the People will win, and we have more than a week’s worth of patience/persistence to see to that.

Below is the letter that we delivered:

We are members of the Occupy Wall St. movement in New York City. We write to you with deep concern and anger due to the unjust imprisonment that is meted out against those in Mexico, the country you and your facility represent, who organize to defend their rights and to obtain justice for their communities.

Unjust imprisonment remains the de facto response of government officials in Mexico towards organized social protest taking place in many communities throughout the country. Local, state, and federal governments in Mexico continue with alarming ease and in a profoundly anti-democracy manner to lock away individuals who voice their discontent and organize in peaceful ways to make positive social change. Such are the twin cases of our brothers Alberto Patishtán Gómez and Francisco Sántiz López–both of whom are indigenous and serving unjust sentences.

We know with certainty that they are not guilty of the crimes of which they have been accused, because their innocence has been amply documented by human rights centers and with witnesses from their respective communities.

Alberto Patishtan has been unjustly imprisoned since 2000. While in prison, he has continued his path of peace, dignity, and justice by organizing many other political prisoners to attain their freedom. Consequently, he was transferred to his current location, in Guasave, Sinaloa, as punishment for his participation in the latest hunger strike that occurred in Chiapas, his home state, in 2011. Many people from around the world now view Alberto Pastishtan as a distinguished social justice figure. Due to his efforts and earned prominence, the Mexican State has punished him acutely.

Francisco López Sántiz Lopez, unjustly imprisoned since December 2011, has committed the “crime” of being a Zapatista support base member. To those of us of the international community, the false accusations and juridical irregularities are enough to support this very obvious truth, let alone the fact that Francisco was not even at the scene of the crime when the unfortunate incident took place.

Many of our fellow members of the Occupy Movements, nationally and internationally, have seen how repression works against our efforts and causes. We have seen the response of the 1% and how they utilize the police to carry out social coercion and control as a means of silencing dissent.

We believe that dissent, social action, and the freedom to peacefully unite people for a common cause are fundamental elements and rights inherent to any democracy. Any attempts to deny the people these and other rights are attacks against democracy and justice.

For these reasons, alongside our sisters and brothers in Mexico and in other countries around the world, we issue our demand for the immediate and unconditional release of Alberto Patishtán and Francisco Sántiz López. We stand in firm solidarity.

May democracy, justice, and freedom be the earned outcome of these heroes.