The Zapatista Army of National Liberation denies having any sort of contact with AMLO. Communique from the CCRI-CG of EZLN 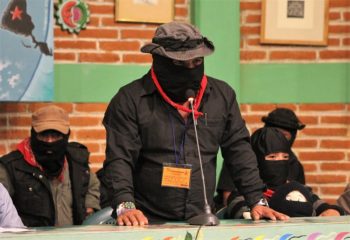 Since yesterday and during today, media has been running a story backed by declarations of Mister Alejandro Solalinde (who presents himself as a presbyter, priest, clergyman or however its said, christian, catholic, Roman Apostolic), of a supposed approach between EZLN and Mister Andrés Manuel López Obrador and that “the EZLN already agreed to have a first dialogue” (textual words by Mister Solalinde).

About this lie EZLN declares:

First: The CCRI-CG of EZLN, the political, organizational and military directorate of EZLN, hasn’t agreed to a first dialogue with anyone. As its well know by whoever has the minimum knowledge of EZLN and its ways, a matter like this would have been made public well in advance.

Second: EZLN hasn’t received from Mister Solalinde anything but lies, insults, libel and racist and sexist comments, by assuming just like it was done during the days of Salinismo and Zedillismo, that we are poor ignorant indigenous manipulated by the -quoting his own words- “Caxlanes who administer Zapatismo” that don’t allow us to look down and kneel to the mister whose Solalinde considers the new savior.

Third: We understand Solalinde’s need to be on the spotlight and his demand for our submissiveness, but he is wrong about EZLN’s Zapatismo. Not only he is wrong about that. We don’t know much about it, but it seems like one of the church commandments to whom Mister Solalinde supposedly serves, which goes: “Thou shalt not bear false witness against thy neighbour, and you won’t lie”.

Fourth: As anyone who knows Mexican Law would be aware, Mister Andrés Manuel López Obrador is not the President of Mexico, and he is not even President Elect. To become “President Elect” the Electoral Tribunal Of The Federal Judicial Branch needs to emit a declaration about it; afterwards the House of Representatives has to issue an edict on the Official Federal Gazette where it communicates to the population that now there is a President Elect. And according to those same laws, he is not a President in Office until he swears on the day of December 1st, 2018. By the way, according to the new Electoral Reform, he won’t rule for 6 years, but for 2 months less than that. Of course, unless the constitution is reformed and re-election becomes allowed.

Fifth: If the team of Mister Andrés Manuel López Obrador behaves as if they are the government its because that’s what the great businessmen made them believe (via Youtube, which must be a guarantee of veracity), Trump’s Administration (via its pharaonic visit), and the great media conglomerates, and its understandable; but maybe its not convenient to let everyone know their willingness towards breaking the law under the protection of a supposed “complete car” (which is what PRI did during their long reign).

Sixth: The EZLN already had the bitter experience of accepting communication with a mister who afterwards was declared President Elect. We refer to Mister Ernesto Zedillo Ponce de León, who took advantage of the initial contact to plan the annihilation of the Zapatista leadership of back then. The person who operated such betrayal, Mister Esteban Moctezuma Barragán, its now one of the proposed to form part of the government who supposedly should take ownership on December 1st, 2018, and not anytime before. Now, we ignore if Mister Solalinde pretends to replace Mister Moctezuma Barragán on the same role he performed under Zedillo.

Seventh: It is not our business, but it is bad enough that those who call themselves “the true change” start off with lies, libel and threats. They already did it with the Pope, now with the EZLN. They are repeating the “customs and habits” of those whom they say they ousted from the government.

Eight: As it has been public knowledge from at least 16 years now, the EZLN hasn’t hold any dialogue with the Federal Government after the indigenous counter-reform. Not with Fox after 2001, nor Calderón or Peña Nieto. Our goodwill for dialogue has always been received with lies, libel and betrayal. If you are so kind, please lend Mister Solalinde some press clippings and books that tell about this in detail, cause he is doing just as those before him.

Ninth and Last: If we are “sectarians”, “marginals”, and “radicals”; if we are “isolated” and “alone”; if we are “out-dated“; if we don’t represent nothing and no one; then why don’t they let us alone in peace and just continue celebrating their “triumph”? Why don’t they instead prepare better -and without lies- for those 5 years and 10 months they will be in the Federal Government? And organize yourselves, because even to fight for a bone (or crumbs) and to receive recognition from money it helps to be organized.

Us Zapatistas? Well, we’ll keep on going on what we’ve been for the last almost 25 years:

Because freedom can’t be awarded as a hand out, or as a human or divine favor; its won by struggle.

Subcomandante Insurgente Moisés.
(100% Mexican, 100% native of the tzeltal language (or “indigenous tzeltal” for Mister Solalinde), and a 100% zapatista).