CNI and EZLN: The Time Has Come 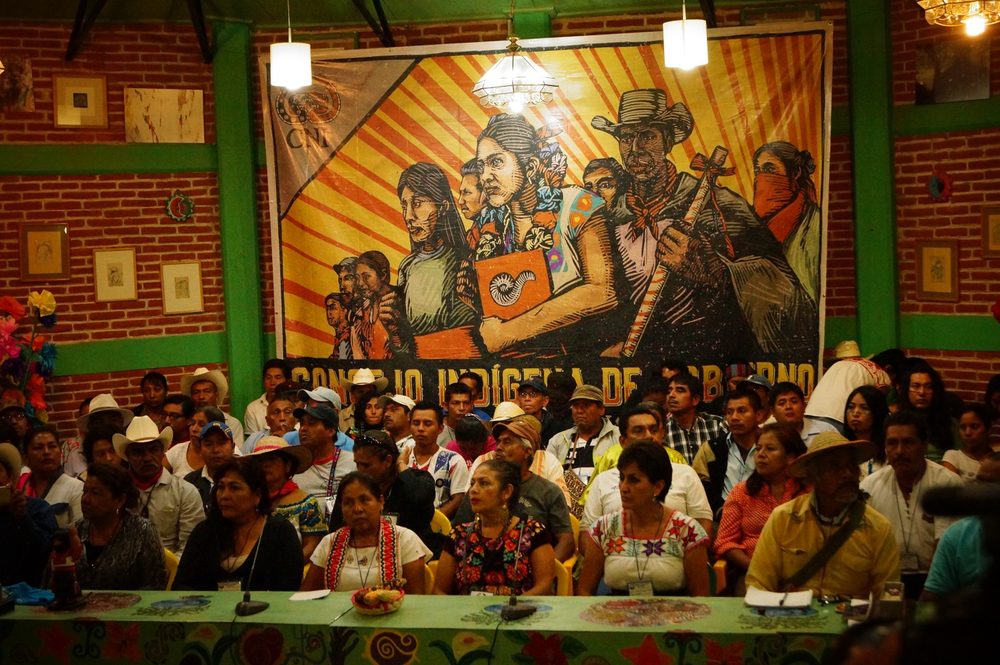 The Time Has Come

Listen (in Spanish) to the Declaration, read during the Assembly to Constitute the Indigenous Governing Council, Cideci/Universidad de la Tierra Chiapas, 28 May 2017:
(Descarga aquí)

To To the People of Mexico,
To the Peoples of the World,
To the Media,
To the National and International Sixth,

THE WAR THAT WE LIVE AND CONFRONT

We find ourselves in a very serious moment of violence, fear, mourning, and rage due to the intensification of the capitalist war against everyone, everywhere throughout the national territory. We see the murder of women for being women, of children for being children, of whole peoples for being peoples.

The political class has dedicated itself to turning the State into a corporation that sells off the land of the originary peoples, campesinos, and city dwellers, that sells people as if they were just another commodity to kill and bury like raw material for the drug cartels, that sells people to capitalist businesses that exploit them until they are sick or dead, or that sells them off in parts to the illegal organ market.

Then there is the pain of the families of the disappeared and their decision to find their loved ones despite the fact that the government is determined for them not to, because there they will also find the rot that rules this country.

This is the destiny that those above have built for us, bent on the destruction of the social fabric—what allows us to recognize ourselves as peoples, nations, tribes, barrios, neighborhoods, and families—in order to keep us isolated and alone in our desolation as they consolidate the appropriation of entire territories in the mountains, valleys, coasts, and cities.

This is the destruction that we have not only denounced but confronted for the past 20 years and which in a large part of the country is evolving into open war carried out by criminal corporations which act in shameless complicity with all branches of the bad government and with all of the political parties and institutions. Together they constitute the power of above and provoke revulsion in millions of Mexicans in the countryside and the city.

In the midst of this revulsion they continue to tell us to vote for them, to believe in the power from above, to let them continue to design and impose our destiny.

On that path we see only an expanding war, a horizon of death and destruction for our lands, our families, and our lives, and the absolute certainty that this will only get worse—much worse—for everyone.

We reiterate that only through resistance and rebellion have we found possible paths by which we can continue to live and through which we find not only a way to survive the war of money against humanity and against our Mother Earth, but also the path to our rebirth along with that of every seed we sow and every dream and every hope that now materializes across large regions in autonomous forms of security, communication, and self-government for the protection and defense of our territories. In this regard there is no other path than the one walked below. Above we have no path; that path is theirs and we are mere obstacles.

These sole alternative paths, born in the struggle of our peoples, are found in the indigenous geographies throughout all of our Mexico and which together make up the National Indigenous Congress. We have decided not to wait for the inevitable disaster brought by the capitalist hitmen that govern us, but to go on the offensive and convert our hope into an Indigenous Governing Council for Mexico which stakes its claim on life from below and to the anticapitalist left, which is secular, and which responds to the seven principles of Rule by Obeying as our moral pledge.

No demand of our peoples, no determination and exercise of autonomy, no hope made into reality has ever corresponded to the electoral ways and times that the powerful call “democracy”. Given that, we intend not only to wrest back from them our destiny which they have stolen and spoiled, but also to dismantle the rotten power that is killing our peoples and our mother earth. For that task, the only cracks we have found that have liberated consciences and territories, giving comfort and hope, are resistance and rebellion.

By agreement of this constitutive assembly of the Indigenous Governing Council [CIG when abbreviated in Spanish], we have decided to name as spokesperson our compañera María de Jesús Patricio Martínez of the Nahuatl people, whose name we will seek to place on the electoral ballot for the Mexican presidency in 2018 and who will be the carrier of the word of the peoples who make up the CIG, which in turn is highly representative of the indigenous geography of our country.

So then, we do not seek to administer power; we want to dismantle it from within the cracks from which we know we are able.

We trust in the dignity and honesty of those who struggle: teachers, students, campesinos, workers, and day laborers, and we want to deepen the cracks that each of them has forged, dismantling power from above from the smallest level to the largest. We want to make so many cracks that they become our honest and anticapitalist government.

We call on the thousands of Mexicans who have stopped counting their dead and disappeared and who, with grief and suffering, have raised their fists and risked their own lives to charge forward without fear of the size of the enemy, and have seen that there are indeed paths but that they have been hidden by corruption, repression, disrespect, and exploitation.

Our call is to organize ourselves in every corner of the country, to gather the necessary elements for the Indigenous Governing Council and our spokeswoman to be registered as an independent candidate for the presidency of this country and, yes, to crash the party of those above which is based on our death and make it our own, based on dignity, organization, and the construction of a new country and a new world.

We convoke all sectors of society to be attentive to the steps decided and defined by the Indigenous Governing Council, through our spokeswoman, to not give in, to not sell out, and to neither stray nor tire from the task of carving the arrow that will carry the offensive of all of the indigenous and non-indigenous peoples, organized or not, straight toward the true enemy.

From CIDECI-UNITIERRA, San Cristóbal de las Casas, Chiapas
May 28, 2017
For the Full Reconstitution of Our Peoples
Never Again a Mexico Without Us