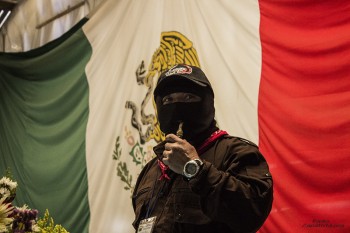 Sisters and brothers of the National Indigenous Congress:

Compañeras, compañeros and compañeroas of the national and international Sixth:

Peoples of Mexico and the world:

Twenty-three years ago we rose up in arms against oblivion.

Our indignation and desperation compelled us to be willing to die in order to live.

To live the only way that’s worth living: with freedom, justice, and democracy.

The Mexican people saw us and spoke to us: they told us that our struggle and our demands are just, but that they are opposed to violence.

As the inhumane conditions of our life and death became known, people agreed that the causes of our uprising were just, but they questioned our way of enacting our dissent.

Today, the conditions of the Mexican people in the countryside and in the city are worse than they were 23 years ago.

Poverty, desperation, death, and destruction are not only wrought on the people who originally populated this land.

The crisis also affects those who believed that they were safe and who imagined that the nightmare was only meant for those who live and die below.

Governments come and go, under different colors and flags, and all that they do is make things worse.

Their policies only bring misery, destruction, and death to greater and greater numbers of people.

Now our sisters and brothers in the organizations, barrios, nations, tribes, and originary peoples, organized in the National Indigenous Congress have decided to scream, “ENOUGH!”

They have decided that they will no longer allow the destruction of our country to continue.

They have decided not to allow the peoples and their history to die from the sickness that is the capitalist system; a system that exploits, dispossesses, represses and devalues human beings and nature all over the world.

Their causes are just, undeniably so.

Who will now question the path they have chosen and to which they are calling all of us, all women, all men, all others [todoas]?

Twenty-three years ago we began our uprising, but our path was exclusionary: everyone could not participate.

Now, the National Indigenous Congress is calling us to a struggle in which everyone can participate, no matter their age, color, size, race, religion, language, salary, knowledge, physical strength, culture, or sexual preference.

Those who live, struggle and die in the countryside and the city now have a path for struggle where they can join together with other women and men.

The National Indigenous Congress is calling and inviting us to a struggle for life with freedom, justice, democracy, and dignity.

Who dares to say that this struggle is a bad one?

Now is the time of all people, from the countryside and the city.

That’s what the National Indigenous Congress is telling us.

It’s telling us: enough waiting for other women and men who want to tell us what to do and how to do it; who want to boss us around, who want to manage us, who want to trick us with promises and bold-faced lies.

It’s telling us that every person, wherever they are, in their own way, at their own pace, should be in charge of him or herself; that communities should manage themselves. No more lies, no more tricks, no more politicians who only see their work in the government as an opportunity to steal, to betray, and to sell out.

It’s telling us that we have to fight for truth and justice.

It’s telling us that we have to fight for democracy, which is another way of saying that the people themselves are in charge.

It’s telling us that we have to fight for freedom.

The National Indigenous Congress is made up of wise women and wise men.

They’ve been resisting and fighting for life for centuries.

They know who is responsible for the pain that beats down every woman and man, everywhere, all the time.

Because of this fight that begins today, the National Indigenous Congress will be attacked. It will be insulted. There will be attempts to divide it, and to buy it off.

Every effort will be made to make them give up, sell out, give in.

But those efforts will not succeed.

The CNI’s strength, conviction, and commitment does not come from individual men and women.

It comes from the organizations, neighborhoods, nations, tribes and originary peoples in which they were born and in which they matured.

We Zapatistas prepared ourselves for ten years to begin our struggle on January 1 twenty-three years ago.

The National Indigenous Congress prepared for twenty years to arrive at this day and to show us a good path forward.

Whether or not we follow will the decision of each person.

The National Indigenous Congress is going to speak the truth and listen closely.

The struggle of the National Indigenous Congress is no game.

They have told us that this time, they want everything, for every woman and every man.

And that means that:

They want respect for human rights.

They want the release of all political prisoners.

They want all disappeared people to be given back alive.

They want justice for those who have been murdered.

They want truth and justice for the 46 missing from Ayotzinapa.

They want support for peasants and respect for mother earth.

They want dignified housing for all those from below.

They want sufficient food for all those who are defenseless.

They want dignified work and a just salary for the workers in the countryside and the city.

They want complete and free medical care for all workers.

They want land to belong to those who work it.

They want the factories to belong to the workers.

They want the stores and banks to belong to the employees.

They want respect for street vendors, and for small and medium-sized businesses.

They want public and commercial transportation to belong to those who drive the vehicles.

They want the countryside to belong to the campesinos.

They want the city to belong to its inhabitants.

They want the territory to belong to the originary peoples.

They want respect for all forms of life.

They want the arts and sciences.

They want freedom of thought, of work, and of creation.

They want freedom, justice and democracy for the Mexico of below.

That is what they’re after.

We will find ways to support them with all of our strength.

We will support you because the fight you are proposing, sisters and brothers of the National Indigenous Congress, is perhaps the final opportunity to stop this land and these skies from disappearing through destruction and death.

So all we have to say to you is:

Listen to your heart, to the pain and the rage that exist in all corners of this country.

Walk, and may the earth tremble at its core with your steps.

May these Mexican soils be astonished.

May the skies look upon you with surprise and admiration.

May the peoples of the world learn and take heart from your decision and your conviction.

And above all, regardless of whatever may happen and of everything that stands against you, even if they attack you in every possible way, whatever it takes: don’t give up, don’t sell out, don’t give in.

In the name of the women, men, children and elders of the EZLN.