END_OF_DOCUMENT_TOKEN_TO_BE_REPLACED

We from Below Rebuild! – The EZLN Invites to the World Festival of Resistances and Rebellions

EZLN invites to the World Festival of Resistances and Rebellions “Where those from Above Destroy, those from Below Rebuild”

To the brothers and sisters of the National and International Sixth:

In the gathering of our peoples in the Exchange between Zapatista Peoples and the National Indigenous Congress “David Ruíz Garcia,” we shared with each other our pain as well as our words and experiences of struggle, rebellion, and resistance.

These rebellions and resistances are not just those of the indigenous peoples of Mexico. They are also found in the footsteps of the originary peoples across the continent and in all corners of the earth where individuals, groups, collectives, and organizations not only say “NO” to destruction, but go about constructing something new.
END_OF_DOCUMENT_TOKEN_TO_BE_REPLACED

END_OF_DOCUMENT_TOKEN_TO_BE_REPLACED

Words of the National Indigenous Congress compañero Armando García Salazar, of the hñahñu´ people of San Francisco Xochicuautla, in homage to the deceased compañero DAVID RUIZ GARCÍA during the Exchange between Indigenous Peoples and Zapatista Peoples, August 4, 2014.

TWO SHORT CHRONICLES OF THE HOMAGE.

I. Words of compañero Armando García Salazar on behalf of the family and compañeros of the deceased compañero David Ruiz García.

Good morning brothers, sisters, grandparents, children, and all of the compas who represent this movement.

Two months ago a nephew, a son, came to these lands in support of our brother Galeano. Unfortunately he suffered an accident upon his return.

Out of eagerness to defend justice and indigenous rights, he had been part of this movement for eight years. He very much wanted to come meet the Zapatista brothers, and to be frank, shake the hand of Subcomandante Marcos. It was his greatest desire. And he fulfilled it. He came to La Realidad.

Unfortunately, destiny is like this. Today, despite this, we, his brothers and his relatives, are here again. We will not retreat; David would have wanted us to go forward.

END_OF_DOCUMENT_TOKEN_TO_BE_REPLACED

The words of Comandante Tacho, on behalf of the Indigenous Revolutionary Clandestine Committee – General Command of the EZLN, at the Inauguration of the First Exchange of Indigenous Peoples of Mexico with Zapatista Peoples. 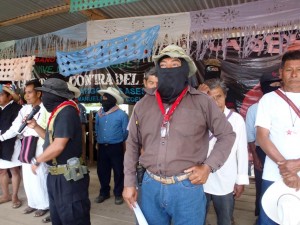 COMPAÑERAS AND COMPAÑEROS OF THE NATIONAL INDIGENOUS CONGRESS:

COMPAÑEROS AND COMPAÑERAS OF THE INDIGENOUS PEOPLES WHO ARE VISITING US:

We greet you hoping that everyone has arrived safely to these Zapatista lands.

You have made a long journey from distant lands to meet us here in this corner of rebellious Zapatista lands of the Mexican Southeast.

END_OF_DOCUMENT_TOKEN_TO_BE_REPLACED

Displacement of Zapatista Bases before the risk of attack

Thirty two people from the Egipto (Egypt) autonomous community, belonging to the Caracol of La Garrucha, were forcibly displaced.

Residents of the Ejido Pojcol invade recuperated lands of the Bases of Support of the Zapatista National Liberation Army (BAEZLN, their initials in Spanish)

END_OF_DOCUMENT_TOKEN_TO_BE_REPLACED

To the Sixth in Mexico and in the world:
To the free, autonomous, alternative, or however-you-call-it media:

FIRST. I am writing to let you know that the participants of the National Indigenous Congress have arrived safely to this First Exchange of the Zapatista Peoples and the Indigenous Peoples of Mexico “Compañero David Ruiz García.” The compañeras and compañeros bases of support who will be sharing their history of struggle have also arrived.

Here I want to share some information with you:

1. From the National Indigenous Congress as well as other indigenous social groups, peoples, tribes, and nations of Mexico, 312 participants have arrived from the following groups:

2. On behalf of the Zapatista communities, we have the participation of:

In total: 1300 Zapatista bases of support.

All have arrived safely. I am letting you know so that you can inform others where you live and that way the families of those who have come from far away do not worry.

SECOND. As proposed by the compañeras and compañeros of the National Indigenous Congress, the closing event of this first exchange, on Saturday August 9, 2014, will be open to the press in general.

THIRD. The compañeras and compañeros of the National and International Sixth are special invitees to the closing event.

FOURTH. The compañeras and compañeros of the free, autonomous, alternative, or however-you-call-it media are special invitees to the closing event.

FIFTH. The compañeras and compañeros of the National and International Sixth are welcome to arrive as of Friday August 8, 2014, and their departure is at their own convenience.

We ask the free, autonomous, alternative, or however-you-call-it media to see about staying one extra day after the closing event so that we can hold that cursed press conference that we’ve been promising you, and which we couldn’t hold last time because we saw that you needed to leave quickly because the paid media were stealing the material you produced at the Homage for our deceased compañero Galeano. Indeed that is how capitalism works, stealing what others produce. So let’s see if you can organize things so that you can report on the closing event and then later we will do the press conference.

And SupGaleano tells me to inform the free, autonomous, alternative, or however-you-call-it media to come prepared because we are going to interview you. He says we are going to include a section in our magazine REBELDÍA ZAPATISTA called “The ducks shoot at the rifles,” where we will print the interviews we do with you. SupGaleano says that you will understand why the section has that title.

Finally, the last thing for today, I am sending you some photos that SupGaleano took of the set-up that has been prepared here. We’ll see if they send because the internet here is really slow, it’s like a snail with a limp. He says the title of the photos is “The Zapatista Alternative to the International Monetary Fund and the Usurious Banks: The Zapatista Mobile Bank.”[i] If the photos don’t go through, you can see the Zapatista Mobile Bank when you come.

You will also be able to see how the reconstruction is coming along for the clinic and the school that were destroyed by the CIOAC-Histórica paramilitaries.

It would be good for you to take photos, video, or whatever of the construction so that the good people who supported this just cause can see in the free, autonomous, alternative, or however-you-call-it media that we are honoring our word, not like the bad governments who keep everything for themselves while they say they are making social improvements. Pure thievery is what they do.

Well that’s all for now, compañeras and compañeros of the National and International Sixth. Tomorrow, Monday, after the inauguration, the work of the exchange will begin. We will send you the inaugural speech that compañero Comandante Tacho will give in the name of all of the Zapatistas.

Subcomandante Insurgente Moisés.
Mexico, August 2, 2014. In the twentieth year of the war against oblivion.

[i] The photo shows a large covered area with many rows of small, carved wooden stools referred to in Spanish as “bancos,” which also happens to be the Spanish word for bank. END_OF_DOCUMENT_TOKEN_TO_BE_REPLACED