Communique from the CNI-CIG, and the EZLN: Another Simulated Referendum to Justify Megaproject Development in the Isthmus of Tehuantepec

The plans for dispossession and destruction that the bad governments call the “Isthmus of Tehuantepec Development Program,” are for us as originary peoples an announcement of the tragedy they now intend to extend through the territories of all of the Isthmus peoples.

As the CNI-CIG, we reject and condemn the bad governments’ so-called referendum, to be carried out throughout the Isthmus communities March 30 and 31, which simulates consultation of our peoples in order to impose these megaprojects of death.

We denounce the corrupt practices with which the bad governments, through their National Institute for Indigenous Peoples, have sought to divide, deceive, and intimidate our communities, offering programs and projects in exchange for yes votes in their so-called referendums, as if it were not precisely our territories and natural resources which are at stake.

The Binizzá, Ikoot, Chontal, Zoque, Nahua and Popoluca originary peoples who inhabit the Isthmus of Tehuantepec in the states of Oaxaca and Veracruz have already made clear our “NO” to these megaprojects of death, which will lead to the destruction of our territories and the death of our mother earth.

We reject the invasion of our territories by mining companies that will destroy the mountains, springs, rivers, and air, as well as by the wind power companies that use the wind as a tool of negotiation to displace us from our lands. We do not want their trains, which only transport death, nor their repressive military or paramilitary violence, which devastate our territories.

We state once again that we will not cease in our struggle to protect mother earth and our indigenous communities and territories no matter how many simulated referendums the bad neoliberal capitalist government carries out in order to impose—via war—projects that prioritize money over the life of the originary peoples and of nature. On the contrary, we will continue to organize ourselves in resistance and rebellion with all those below.

We call upon all honest organizations and collectives, on the CIG support networks and on the national and international Sixth to be alert and ready to respond in solidarity to this new attempt to impose projects of dispossession.

Convocation to the Events: “Zapata Lives, Samir Lives, The Struggle Continues” on the 100th Anniversary of the Assassination of General Emiliano Zapata Salazar

Convocation to the Events:
“Zapata Lives, Samir Lives, The Struggle Continues”
on the 100thAnniversary of the Assassination of General Emiliano Zapata Salazar

Our brother Samir Flores Soberanes was murdered by the neoliberal regime—we don’t know if it was the government, big business, their criminal cartels, or all three together.

The so-called “Fourth Transformation” began with Miguel de la Madrid Hurtado, was intensified by Carlos Salinas de Gortari, continued as a war of conquest by Ernesto Zedillo Ponce de León, Vicente Fox Quezada, Felipe Calderón Hinojosa, and Enrique Peña Nieto; and is now extended through the long-term project of Andrés Manuel López Obrador and the Party of National Regeneration [MORENA]. For the originary peoples, the only “real change” will be an increase in lies, tricks, persecution, threats, imprisonment, displacement, murder, mockery and disrespect, human exploitation and natural destruction—in sum, the annihilation of the collective life that we are.

The current neoliberal government headed by Andrés Manuel López Obrador has its sights set on our peoples and territories. Using its “National Institute for Indigenous Peoples”, it has put into place a web of cooptation and disorganization that clears the way for a war whose principal front will be industrialization. This war will be implemented via infrastructure projects and violence and backed by the armed forces and the soon-to-be National Guard, casting a dark shadow of death and destruction over the originary peoples of our country.

We restate our firm opposition to the neoliberal policies of old and new governments; to the referendums or whatever they choose to call them whose only purpose is our displacement from and dispossession of our territories; to mining, to the damming of our rivers, to highway construction and the acceleration of real estate speculation throughout our lands, to the construction of neoliberal megaprojects of death like the Integral Project for Morelos, the Trans-isthmus Corridor, and the Mayan Train.

We have not forgotten that the struggle led by General Emiliano Zapata Salazar and the Liberation Army of the South and Center represented and continues to represent the interests and aspirations of our peoples and of millions of the exploited in Mexico and the world. This upcoming April 10 is the 100thanniversary of the cowardly murder of General Emiliano Zapata Salazar by the political regime that, despite its “transformations”, continues to govern today.

Given this, we convoke a National Assembly of the indigenous peoples of the National Indigenous Congress/ Indigenous Governing Council, adherents to the Sixth Declaration of the Lacandón Jungle, the Support Networks for the Indigenous Governing Council, and collectives and organizations organized in struggle against capitalism, to take place on April 9 of this year in the indigenous community of Amilcingo, municipality of Temoac, Morelos, from 10:00am-6:00pm.

We also convoke a national and international mobilization to mark the 100th anniversary of the murder of General Emiliano Zapata Salazar. The mobilization’s epicenter will be Chinameca, Morelos, on April 10, 2019, beginning at 9:00am.

The schedule of activities will be published shortly.
END_OF_DOCUMENT_TOKEN_TO_BE_REPLACED

END_OF_DOCUMENT_TOKEN_TO_BE_REPLACED

CNI/CIG/EZLN Denunciation of the Murder of Samir Flores Soberanes
February 20, 2019

To the people of Mexico and of the world:
To the CIG Support Networks:
To the Networks of Resistance and Rebellion:
To the National and International Sixth:
To the media:

With pain and rage we denounce the cowardly murder of our compañero Samir Flores Soberanes, community leader in Amilcingo, Morelos, and key figure in the opposition to the “Integral Project for Morelos”. Soberanes was a long-time delegate to the National Indigenous Congress.

On February 20th at approximately 5:40 am, armed individuals in two vehicles showed up at Soberanes’ house and knocked on the door. When he answered they shot him four times, including two bullets to the head that would end his life within minutes.

Just the day before, Samir had presented arguments against the “Integral Project for Morelos” at an event in the Jonacatepec municipality organized by Hugo Erick Flores, representative of the bad government at the federal level. The event was connected to the supposed “referendum” that the government intends to use in order to justify building a thermoelectric plant and associated industrial projects in Huexca, Morelos, which will require territorial dispossession and pose a risk to all life in the region.

We hold the bad government and its bosses—corporations and armed groups that operate both legally and illegally—responsible for this crime, through which they intend to rob us blind, kill us off, and extinguish the glimmers of light that give us hope, which is what our compañero Samir was to us. 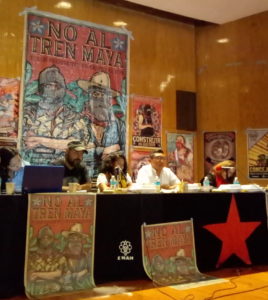