Them and Us. VII.- The Smallest of them All 1.- Learning to govern and govern ourselves, that is, to respect and respect ourselves.

1.- Learning to govern and govern ourselves, that is, to respect and respect ourselves.

Note: the notebooks that make up the support material for the course “Freedom According to the Zapatistas,” are a product of meetings that the Zapatista bases of support in all zones have carried out to evaluate their work in the organization.

Compañeras and compañeros from the communities in resistance of the 5 caracoles,[i] tzotziles, choles, tzeltales, tojolabales, mames, zoques y mestizos, gathered to ask and answer questions among themselves, exchange experiences (which are different in each zone), and to criticize, self-criticize, and evaluate what they have done so far and what they still have to do. These meetings were coordinated by our compañero Subcomandante Insurgente Moisés, and were recorded, transcribed, and edited for the notebooks. Since during these meetings the compas shared among themselves their thoughts, histories, problems, and possible solutions, they themselves named the process: “the sharing.” These are a few loose fragments of the Zapatista sharing:

The way we work is by not separating ourselves from the people. Always, with issues of regulations, plans, activities, and work, we have to get information from the people, and the [community] authorities have to be present in making the plans, making the proposals.

We are thinking and working through various things, and we think that part of the duty of autonomous government is to attend to whoever comes to our office with an issue. Whether or not that issue can be resolved, it must be heard. This is for whoever comes in, Zapatista or not, that is how we work. The exception to this is people from the government or people sent from the government, in which case they are not attended to. But as long as that is not the case, anyone from any social organization is heard. Also in our work we are always vigilant about honoring the seven principles of “rule by obeying.” We consider this to be necessary, to be our obligation, in order not to make the same mistakes and develop the same habits of the entities of bad government. So the seven principles are what govern us.

The first Aguascalientes, built in Guadalupe Tepeyac, was where we took our first step toward organization and toward our own way of exercising our rights. This Aguascalientes was a cultural, political, social, economic, and ideological center. When Ernesto Zedillo[ii] betrayed us in a [military] offensive that dismantled the Aguascalientes, he thought our organizational politics would come to an end. But the opposite happened, because that same year, 1994, it was declared that we would build five more Aguascalientes.

These municipalities decided where their municipal seat would be, and began to think about names for the municipalities, what they would be called when the Aguascalientees was ready. The first autonomous municipality, La Garrucha, was called Francisco Gómez; the municipality that is today San Manuel was before Las Tazas; Taniperlas was renamed Ricardo Flores Magón; San Salvador was named Francisco Villa.  All of these names honored compañeros. Francisco Gómez, a name we all know now, was a compañero who gave his life to our cause, he died in combat in Ocosingo on January 1st. San Manuel honors the compañero Manuel, founder of our organization. Ricardo Flores Magón, we know was a warrior of social struggle in our history. And Francisco Villa was also a revolutionary that we all know. So our municipalities were formed as agreed in our community assemblies, and in the regional assembly we decided on their names. Compañeros, those are the few words that I have to say and now other compañeros or compañeras will explain what comes next.

The principal problems that we had since the beginning of [inaudible], the problem of alcoholism, how is this problem now in your zone?

So in those days, at the beginning of 1994, a little after the war, some joined [the organization] out of fear. The war started, we all got together, we joined up for various reasons, but we joined up. Some did so consciously, but others out of fear. So those that joined out of fear, well of course they weren’t happy doing the work of the organization, so what did they do? We had the order not to drink alcohol, but they drank anyway, while trying to hide it. So what did we do? We didn’t punish them, what we did—and this is why we have the commission of elders—was have this commission explain to them why we made this rule, and explain the damage they were doing to themselves. So those who want to obey keep going, and those who don’t leave. That is our answer.

Compañeros and compañeras, good afternoon to everyone.  I come from a village called ____, which is part of the municipality Francisco Villa.  I am here representing the Junta de Buen Gobierno [Good Government Council], my cargo[iii] was Consejo[“Council”], from 2006 to 2009. I am going to explain how the responsibilities we have today came about. It’s not my job yet to explain where we started in 1994, rather, I’m going to tell a little about where we started after 1994. Before, in 91, 92, what was the cause of the armed uprising? It was the domination, marginalization, humiliation, injustice, and the norms or laws of the bad governments and the landowning exploiters. In those days, our parents and grandparents were not taken into account, they suffered, and didn’t have land to work and maintain their children. So the Zapatista pueblos began to organize, we said “enough of so much humiliation.” So we rose up in arms, we weren’t bothered by having to walk at night, or by hunger.

So we trained and educated ourselves, and we saw that organized, united, we could do things, and that we would be able to do many more things. After the uprising, we began to look at how to advance the training of our autonomous authorities in each municipality. That’s why we are all gathered here, to talk and share how our autonomous governments began to function. Why do I want to explain a little about this? Because I think that from that point on we were advancing toward where we are now. On this subject the compañero ___ is going to explain how we are working in our municipalities and in the Junta de Buen Gobierno today. That’s all I have to say, compañeros.

Compañeros, as the other compa already told you, now our compañero ____ is going to try to explain a little because he was the founder of our autonomous government in Caracol III, in la Garrucha, they were the first authorities. So they are going to share how they worked, how they were, how they began, and how things have been until today.

Ah I forgot to mention something before, about a month after we began our work, an organization called CIOAC [of PRD affiliation], kidnapped one of our compañeros along with a truck, so we had to denounce this but we didn’t have any idea how to make a denunciation. Members of the Junta de Buen Gobierno and municipal councils had to go and speak, a few words each, to make this denunciation, as a team, and that’s how we went about making the denunciation, but we got it out. And that’s why we started designating a secretary, a cook, someone who sweeps up, because we had to clean up our own office and our work area, we didn’t have anyone especially for those tasks and that’s how we still do it today. 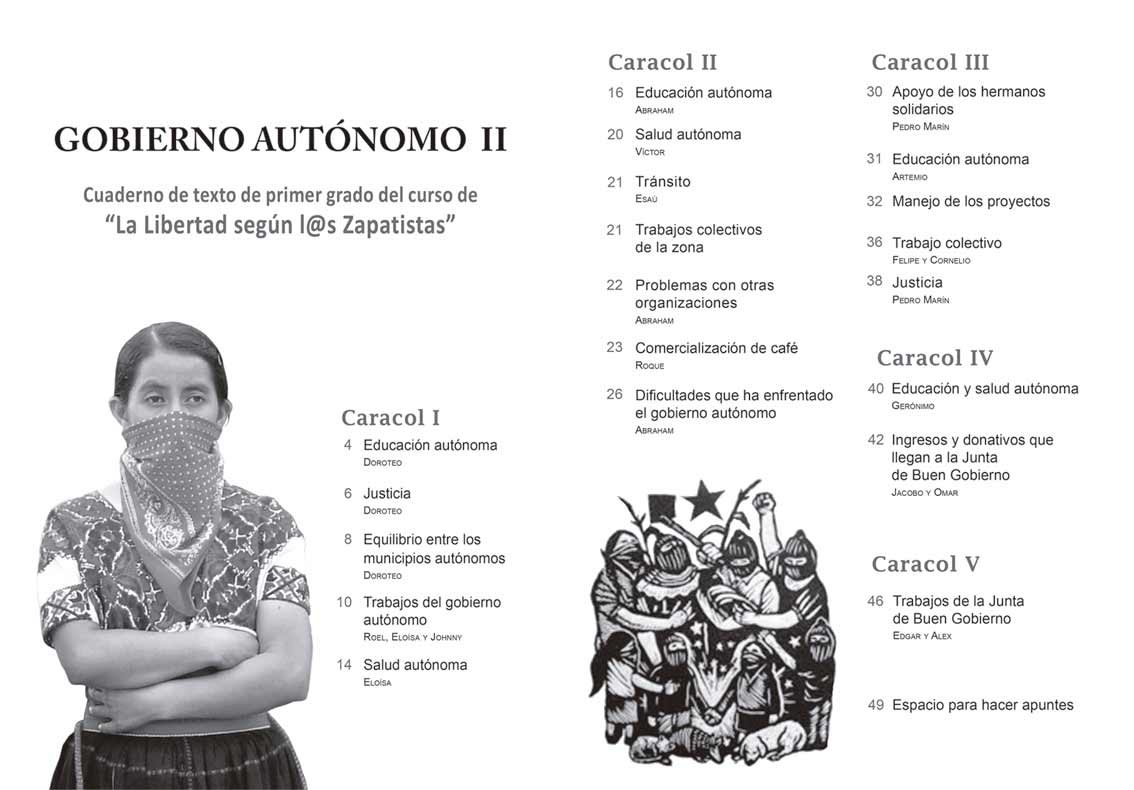 So that’s how it happened, and under those conditions, the Junta de Buen Gobierno did not yet have an adequate space to work in. A few days before the existence of Juntas de Buen Gobierno was made public, the pueblos quickly and urgently constructed a space for the Junta de Buen Gobierno, as well as a place for each of the autonomous municipalities in the center of the Caracol. These were built with the materials that the pueblos had in that moment—used wood and used tin sheets—and that’s how we started, building those spaces, and in less than a week they were ready. So the offices were ready when we made the Juntas public in August of 2003. After they were made public the pueblos gathered together, proud of having created another entity of government as part of our autonomy. We held a party, a big celebration, to formally install the new autonomous government, and give it the office we had built and the materials with which we had supplied it.

We could say it was a bunch of stuff, but what the pueblo gave the Junta de Buen Gobierno was a table with two chairs, those were the supplies, and the space, a little smaller than this room we are in now. Those were the conditions at that time. A few days later, someone donated a very old machine [computer] and with that the work began. We received the space almost empty and that’s how we started, work initiatives arose and we got going, setting up the space.

I testify to this.
From the mountains of the Mexican Southeast.
Subcomandante Insurgente Marcos.
Mexico, February 2013.

“Poder Caracol” by Lengualerta/Cuyo, music Taxi Gang. Video of Pazyarte, images of the Caracol Zapatista in Oventik, Chiapas. At the minute 2:42 they ask 2 international compas what they learned. They respond: “to share.”

Zach de La Rocha, vocalist of Rage Against Machine, explains capital’s interest in annihilating zapatismo (with a small intervention by Noam Chomsky). Zach has been in Zapatista communities, acting like just one more among many, without boasting about who he was and who is he. He knew how to see us; we learned from seeing him. Background music: the track “People of the Sun.”

The track “Canto a la Rebelión,” from the group SKA-P, lyrics included. This track is part of their new album “99%,” which will come out this coming March 2013, courtesy of Marquitos Spoil.  Oh, no reason to be presumptuous.  ¡Órales con el brincolín!

[i] The Caracoles, literally “shells” or “spirals” were announced in 2003 as the homes of the Juntas de Buen Gobierno, or Good Government Councils. They replaced the five Zapatista “Aguascalientes,” one in each zone of Zapatista territory. When the EZLN first announced their existence they were described, in addition to being the seats of the self-government system, as “doors to enter into the communities” and “windows to see in and out.”

[iii] Cargo is like a combination of duty and task, or charge; it also refers to a position of responsibility.