Worldwide campaign in support of the Zapatistas: Freedom and Justice for San Marcos Avilés and Francisco Sántiz 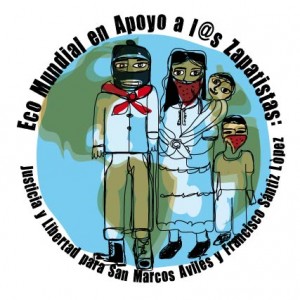 INTERNATIONAL CALL TO ACTION:
“Worldwide Echo in Support of the Zapatistas:
Freedom and Justice for San Marcos Avilés and Sántiz López”

“Worldwide Echo in Support of the Zapatistas:
Justice and Freedom for San Marcos Avilés and Sántiz López”

SISTERS AND BROTHERS: From the brown heart of El Barrio, New York, receive affectionate greetings and an urgent proposal of struggle on behalf of Movement for Justice in El Barrio, The Other Campaign New York. The following is a new and urgent convocation to carry out the: “Worldwide Echo in Support of the Zapatistas:
Freedom and Justice for San Marcos Avilés and Sántiz López”

First Phase: Walking the True Word
August 2012
To all those who fight for justice, dignity, freedom, and democracy, and against oppression, violence, hatred, scorn, poverty, and terror that are the world of those from above… To those who work to build another world, another communication, another politics, another knowledge, another culture, another history, another future… To those who search for and create our path by looking from below and to the left… who learn about life by listening to the wise words of the ancestors… To those who dream of freedom in all its resplendent colors… To those who reject the injustices that, in every country, are imposed and called “economy” and “government”… To those who find inspiration, hope, resonance and reflection in the Zapatistas… Today, with urgency, we are called upon to mobilize, with our whole being, solidarity and support for our Zapatista sisters and brothers of the community in resistance of San Marcos Avilés and for the Zapatista political prisoner Francisco Sántiz López: Responding to the numerous denouncements and calls issued by the Good Government Council of Oventic and the community of San Marcos Avilés, we stand in solidarity with them and add our echo to their dignified “ENOUGH!” against the recent attacks that the Zapatista support base members, the essence of the Zapatista Movement, are facing.  Particularly, this convocation seeks to anticipate and prevent further violence against San Marcos Avilés at the hands of local political party members who have, during the past few days, made renewed threats. These individuals are the “strong arm” of the region’s dominant political parties. They have of late revealed their plan to displace our sisters and brothers of the Zapatista support base. According to recent threats, these enemies of the people intend to kidnap Zapatista community authorities and, in turn, violently displacing other Zapatistas from their community. They have stated, additionally, that they will incarcerate anyone who continues to denounce these unjust aggressions.

We stress here that these attacks are not isolated incidents, but rather are integral components of the prolonged war of extermination that the bad government of Mexico, together with capitalist interests, has carried out for the past 18 years to wipe out the Zapatista movement and all it has given to the world. The objectives of this war have been and remain to continue the colonial project and destroy at any cost indigenous autonomy and resistance, and take over their ancestral lands, and in this way, exploit for the exclusive benefit of those from above the natural resources with which our Mother Earth provides us. Repression, violence, and death are meted out by the bad government of Mexico to those who resist this, who defend their lands, their identities, their cultures, and autonomy – their very existence. The Zapatista ejido and community of San Marcos Avilés, which is made up of Tzeltal indigenous people, has endured an unending nightmare of terror since 2010, when the community’s autonomous school, “Emiliano Zapata,” was constructed as part of the Zapatista Rebel Education System—constituting a major step forward in the community’s advance towards autonomy. During the past two years, this community has suffered various forms of extreme violence, including death threats, harassment, plunder, sexual aggression (including attempted rapes), forced displacement, and others, at the hands of members of the Institutional Revolutionary Party (PRI), Party of the Democratic Revolution (PRD), and the Green Ecological Party (PVEM) of Mexico, and their armed attack groups. Similarly, our compañero Francisco Sántiz López, also an indigenous Tzeltal-speaker and Zapatista from Chiapas, has remained unjustly imprisoned since December 4, 2011, for false crimes that he never committed. His only “crime” is that of being a member of the Zapatista support base. Today he remains a hostage of the bad government of Mexico in its war against all Zapatistas. It is clear that the violence exercised against both San Marcos Avilés and Francisco Sántiz López stems from that same source. Recently, community members of San Marcos Avilés have reported that the threats against them have spiked at an alarming rate during the past few days. In light of these acts of violence and aggression, we would like to propose the following plan of solidarity and struggle, as part of the “Worldwide Echo in Support of the Zapatistas: Freedom and Justice for San Marcos Avilés and Sántiz López.” This campaign is distinguished for its “two-pronged” strategy, and will consist of two interrelated phases. FIRST PHASE:
Walking the True Word: Promotion and Circulation
Timeframe: Entire month of August The first phase, which is called “Walking the True Word,” will span the entire month of August and has as its principal objective the dissemination of information within our respective communities, neighborhoods, ejidos, networks, and countries regarding the current situation of absolute injustice occurring in San Marcos Avilés and the case of the unjust imprisonment of Francisco Sántiz López. To this end, we propose that around the world, from the smallest community to the largest metropolis, we concentrate our organizing efforts and resources on raising consciousness in our communities and networks by forming Committees of the True Word as a way to effectively disseminate critical information regarding the current situation of San Marcos Avilés and the unjust incarceration of Francisco Sántiz López. ·      These “Committees of the True Word” will serve as seeds that will sprout roots in distinct and common lands to grow consciousness, knowledge, and more than anything, rage and inspiration to take concrete action in support of our sisters and brothers of San Marcos Avilés and Franisco Sántiz López.

·      Each committee will seek to disseminate and promote widely the current situation of San Marcos Avilés and Francisco Sántiz López, as they are both are Zapatista support base members. Of particular priority is reaching out to people who are unfamiliar with the history of the Zapatistas. Everyone should know this history of profound pain, hope, and inspiration.

·      It is not necessary to belong to an organization or collective. In this campaign, we can all form a committee on our own and be supportive.  Committees can be formed with friends, co-workers, neighbors, or relatives.

·      If you are already a member of an organization, association, collective, labor union, group, team, club, etc., you can form your own committee with your fellow members.

·      During this first phase, to be clear, the Committees of the True Word can organize a wide range of activities to accomplish our goal. Among the numerous options include: public forums, distributing informative fliers and pamphlets, teach-ins, publishing articles, reflections, and denouncements, translations, social media initiatives, artistic works, etc. The possibilities are endless.

·      We invite all those from below to come together to support our Zapatista sisters and brothers of San Marcos Avilés and our brother Francisco Sántiz López who are all fighting for our shared liberation.

·      Form your Committee of the True Word now!   As soon as you have formed your committee, please let us know what activities you intend to carry out and the location of the committee via email at:    laotranuevayork@yahoo.com. We believe that the true word and knowledge are very important for the struggles of those from below—it is not only the task of the independent/alternative media to circulate truth, but rather it is the responsibility of us all to do so. Moreover, we believe that this phase of consciousness-raising is particularly important, especially in light of the fact that our compas from San Marcos Avilés are suffering this violence for being indigenous, for being Zapatistas, and for having opened their autonomous school. Education and knowledge are also tools and weapons in the struggle for justice, dignity, and democracy—they are nothing less than the forms in which we will construct this new world we seek. As such, in this campaign, education on San Marcos Avilés and Francisco Sántiz López will serve as another way in which we rebel against this system of injustice and oppression, which oppresses at the level of knowledge as well. We shall make use of what those from above seek to repress in order to achieve what we are fighting for: “a dignified justice.” To facilitate the expansion of this phase, we would like to offer a few small tools: 1.    As some of you may know, we have produced a new and moving video message from the compas of San Marcos Avilés, which is available here:
http://www.youtube.com/watch?v=rY-8CBt3Vkg
Please contact us if you wish to obtain a high quality version of the video suitable for public screenings.

2.    We also put together a new website in English and Spanish with web pages with content in French, Italian, German and Japanese and with updates, reports, and important information, and other educational materials on San Marcos Avilés and Francisco Sántiz López. The website is available here:   http://sanmarcosavilesen.wordpress.com/ Following the lead of the community of San Marcos Avilés and the Good Government Council, the goal of this phase is to imbue with knowledge the hearts of as many people as possible, and to bring awareness to the world regarding the constant government-backed violence and the resistance of the dignified people. Immediately after this intensive educational phase, there will be a phase of direct action. Alongside our Zapatista sisters and brothers of San Marcos Avilés and of the Good Government Council of Oventic, we echo their just demands: ·      AN END TO THE WAR AGAINST THE ZAPATISTAS OF SAN MARCOS AVILÉS.

·      IMMEDIATE FREEDOM FOR OUR ZAPATISTA COMPAÑERO FRANCISCO SÁNTIZ LÓPEZ. The gravity of these two situations cannot be ignored. As part of the global struggle for justice, dignity, and democracy, we must respond with open hearts. ·      If you accept our proposal and will participate in this campaign, please let us know as soon as possible via email at
laotranuevayork@yahoo.com. Likewise, please write and send us chronicles of each activity that is carried out via your Committee of the True Word. We will circulate all report backs on the activities realized as part of this campaign, so as to expand the scope and reach of our struggle. We will also share these reports with the community of San Marcos Avilés and the Good Government Council, so that they stay updated and know that they are not alone. These chronicles and report backs can be sent to the same e-mail: laotranuevayork@yahoo.com Because their humanizing cry of dignity, their “ENOUGH!”, has affected all of us who fight for justice from around the world, from our respective trenches of struggle, and has connected very distinct and similar struggles alike… Because this very cry has dwelled in our hearts alongside hope and happiness… We shall let it resound in our echo by adding our voice, our countenance, to ensure that it is heard more profoundly… As if it were said in the very language of our being… For the defense of the Zapatista Resistance, we add our echo… Long live the EZLN!