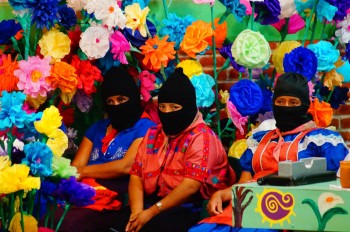 To be a suplenta [the second or substitute to an authority position], first one has to do the work, to give talks about the struggle. We came to see that there were more responsibilities for doing that work. There are meetings in the regions, municipalities, and zones. There are frequent visits to the communities to better organize the compañeras and compañeros in the collective work to sustain the resistance throughout the lands we recovered in 1994, which had been taken away from us by the large landowners. Since the time of clandestinity, we were doing collective work, and also giving talks in each community, to men, women, boys and girls, so that they could understand the struggle.

This is how the work of the compañeras and their participation as Zapatistas kept advancing in all types of work and in any responsibility given to them by the community. In this way, the compañeras came to recognize their rights, that we do have this freedom, the freedom to give opinions, to analyze, to discuss, to plan, on any topic, and in that way the compañeros also understood the rights of women.

The first courage the compañeras showed was to permit their spouses and daughters to be in the struggle. Secondly, they gave their husbands this freedom, because we saw what the men were doing, and that as women we could also do that; we have that courage.

We also have words to offer, ideas to analyze, ways to look at problems. Even though it was very difficult for us, we made the effort. Even though the compañero men were bastards before, we knew how to get them to understand; there are a few that still act like little jerks sometimes, but now it’s not all of them.

But the majority now understand. The compañeras don’t just let it go, they don’t remain humiliated like before, and like compañera Comandanta Miriam said, now the women bring their complaints to the civilian authorities, such as the agentas or comisariadas [local autonomous authorities]. In each community we have agentas and comisariadas, and if it can’t be resolved by the agentas and comisariadas, it goes to the municipal authorities. They are able to resolve things according to the rules and agreements we have in each community.

But don’t think that all of the compañeras complain because they are scared of their spouses; rather, it is important to know these things and talk between compañeras. Whenever we have meetings people begin to talk, and we compañeras have to investigate. That is, we have to figure out how to fix things ourselves, because amongst ourselves we have a lot of patience, not like the men who don’t have patience.

So we saw that yes, we could do the work, and now we take the time and space to participate, and to train another generation, even if we make errors in the process. But if we make mistakes, we fix them ourselves. In this way, we are making our struggle, and we continue organizing; we have a lot of patience as women, which is why we move from local authorities, regional authorities, candidata, suplenta, to becoming part of the Indigenous Revolutionary Clandestine Committee [CCRI].

To better organize the compañeras and to help the youth understand more, we have to orient, convince, to be a kind of matchmaker and infect them, not with illness but with good ideas. It’s not a bad idea to help them understand that they shouldn’t live exploited by the capitalist system; this is what we are doing, and the young people are already organizing. And it’s just like you see here, present with us are these two compañeritas, young compañeras. Their names are Selena and Lizbeth; they are going to be our future authorities, fruits of their generation.

We are doing this in steps, steps without an end; that is why we are here as the CCRI with the Sixth Commission. Thanks to the organization, we have learned to read a little bit, to write a little bit, to speak a bit of Spanish. Before we didn’t know how to speak even one word in Spanish. This is why we are not going to stop organizing as women in this capitalist system, because there is still sadness, pain, imprisonment, and rape. Just as the mothers of the missing 43 do not stop organizing.

This is why we are sharing with you brothers and sisters of the national and international Sixth. Thanks to our Zapatista organization, we Zapatista women are now taken into account; we men and women organize together because of the bad capitalist system.

We want change in everything, in the entire world, for the whole country. But if we don’t organize ourselves, and if we don’t fight against the capitalist system, it will continue until it finishes us all off; there will never be a change.

We need to be fighting at 100%, men and women. To have a new society where the people rule. We as Zapatista women are not going to stop fighting, even as the bad government kills us, because the bad governments are always persecuting us.

I’m sorry compañeros and compañeras, brothers and sisters, I don’t know how to speak Spanish very well. Since I don’t know it well, I hope you’ve heard what I said.