Michoacán: a fight to death for life (documentary)

Rompeviento Internet TV presents the special report “Michoacán: a fight to death for life.” Members of Michoacán’s self-defense groups explain in an interview the reason they arose, the movement’s fruits, the security crisis, and the void of authority in the state, as well as future scenarios. WITH ENGLISH SUBTITLES. When Land Becomes a Merchandise

END_OF_DOCUMENT_TOKEN_TO_BE_REPLACED 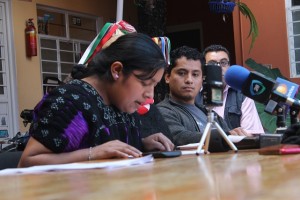 END_OF_DOCUMENT_TOKEN_TO_BE_REPLACED

The Lens that Captured the Zapatista Uprising

Since that Januaryr 1, 1994, the EZLN has been to us a source of hope, light in the darkness of our country and our world. Gift and privilege. Inspiration and the responsibility to struggle and keep on struggling for another world.

When the Dead Silently Speak Out

(A text which reflects on those who are absent and on biographies, narrates Durito’s first encounter with the Cat-Dog, and talks about other things that may or may not be relevant, as the impertinent postscript dictates).

Methinks we have hugely mistaken this matter of Life and Death.
Methinks that what they call my shadow here on earth is my true substance. Methinks that in looking at things spiritual,
we are too much like oysters observing the sun through the water,
and thinking that thick water the thinnest of air.
Me thinks my body is but the lees of my better being.
In fact take my body who will, take it I say, it is not me.
Herman Melville “Moby Dick.”

For a while now I have maintained that most biographies are merely a collection of documented, well-written (well, sometimes) lies. The typical biography is based on a pre-existing belief and the margin of tolerance for anything that strays from that conviction is very narrow, if not inexistent. The author, starting from that previously held belief, begins the search through the jigsaw puzzle of a life unfamiliar to him or her (which is why the bibliography interests them to begin with), and goes about collecting the false or ill-fitting pieces that allow him or her to document their own belief, not the life they are talking about.