With the purpose of condemning the attacks against zapatista communities and creating informational brigades, dozens of people gathered on May 11 outside the Palace of Fine Arts in Mexico City. During the event, the autonomous communications agency Subversiones interviewed Sergio Rodríguez Lazcano:

Read the complete report on the demonstration before the Palace of Fine Arts here.

Invitation: 18 May in San Cristóbal – Solidarity with the Zapatistas

FRAGMENTS OF LA REALIDAD I.

FRAGMENTS OF LA REALIDAD I.

The wee hours of the morning…it must be like 2 or 3 o’clock, who knows. It sounds like silence here in reality [La Realidad]. Did I say “it sounds like silence?” Well it does, because the silence here has its own sound, like the chirping of crickets; some sounds up front, stronger and dissonant; and others always constant, below. There is no light nearby. And now the rain is adding its own silence. The rainy season has arrived here already, but it is not yet heavy enough to wound the earth. Just enough to scratch it a little, a constant pitter-patter. A little scratch here, barely a puddle over there. As if to give a warning. But the sun, the heat,[i] hardens the earth quickly. It is not time for mud; not yet. It is the time of shadow. True, it’s always the time of shadow. It goes anywhere and everywhere, without regard for time. Even where the sun is the most ferocious, the shadow can still be found, clinging to walls, trees, rocks, people. As if the light gave it even more strength. Ah, but night…in the earliest hours of the morning, this is truly the time of [the] shadow. Just as during the day it brings you relief, in the tiny hours of the morning it awakens you as if to say, “and what about you? Where are you?” And you stammer in your slumber, until you can answer clearly—answer to yourself—“in reality.”

END_OF_DOCUMENT_TOKEN_TO_BE_REPLACED

Journeys for Freedom and Autonomy

END_OF_DOCUMENT_TOKEN_TO_BE_REPLACED

To the Compañeras and Compañeros of the Sixth:

To tell you the truth, the communiqué was all ready. It was succinct, clear, precise, how communiqués should be. But…well…maybe later.

For now the meeting with the compañeros and compañeras bases of support of the community of La Realidad is about to begin.

We have known the tone and the emotion with which they speak for a long time: pain and rage.

So it occurs to me that a communiqué will not adequately reflect this.

Or at least not fully.

True, maybe a letter won’t do so either, but at least the words that follow are an attempt, even if they are only a pale reflection.

It was pain and rage that made us challenge everything and everyone 20 years ago.

And it is pain and rage that now again makes us lace up our boots, put on our uniforms, strap on our guns, and cover our faces.

And that leads me to don the old and tattered hat, the one with three red five-pointed stars.

It is pain and rage that has brought us to Reality (La Realidad).

END_OF_DOCUMENT_TOKEN_TO_BE_REPLACED

An ambush against zapatista bases at the caracol of La Realidad on May 2, 2014, resulted in the murder of José Luis Solís López (Galeano), teacher at the Escuelita Zapatista, 15 zapatistas injured, two classrooms and a clinic destroyed, damage to vehicles and other goods belonging to the autonomous zapatista project. Eye witnesses from the Fray Bartolomé de Las Casas Human Rights center reported what happened. 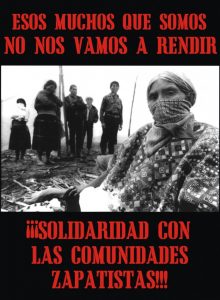 Feminicides are released from prison in Chiapas 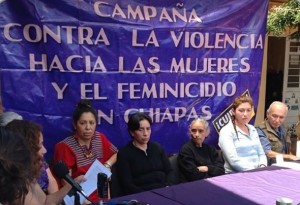 One year after the death of our compañero Juan, adherent to the Sixth Declaration of the Lacandon Jungle, we invite media collective and society in general to a political event on 26 April 2014 at Cumbre Na´choj, to remember our compañero.

The adherents to the Sixth Declaration of the Lacandon Jungle from San Sebastián Bachajón explain the interests behind the waterfalls of Agua Azul and the surrounding region.

Report on mining in Oaxaca presented in San Cristóbal 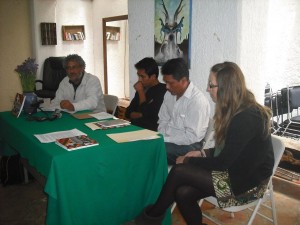 On April 11, the report “Justice for San José del Progreso” was presented in San Cristóbal, the result of a Civil Observation Mission that took place in November 2012. The report demonstrates the systematic violations to human rights resulting from the imposition of the mining project developed by Fortuna Silver Mines since 2006. In the press conference, organized by International Service for Peace (SIPAZ), the case of Chicomuselo, Chiapas, was also discussed. There the population has struggled since 2008 against the serious violations caused by the canadian mining company Blackfire Exploration, which in 2009 resulted in the murder of activist Mariano Abarca.

Roberto Ortiz (Committee for the Promotion and Defense of Life in Chicomuselo “Samuel Ruiz”) – On the case of Chicomuselo, Chiapas.